Half of the dolphins at the attraction east of Scottsdale have died since 2016.
Ellie Nakamoto-White, Arizona Republic

PHOENIX – An Arizona aquatic facility announced Tuesday it will temporarily close while a panel evaluates the facility following the death of a fourth dolphin last week.

A statement from Dolphinaris Arizona said the closure would begin Friday while an outside panel of experts “reevaluates the facility, environmental factors, and all aspects of animal welfare at the facility.”

The panel will include veterinarians, pathologists, water quality experts and animal behavior specialists who will report their findings and recommendations, the statement said.

The statement said Dolphinaris is “committed to ensuring the well being of the remaining dolphins.”

Kai, a 22-year-old dolphin, died Thursday morning after his condition began deteriorating and he had difficulty swimming, eating and breathing, according to a statement from Dolphinaris. 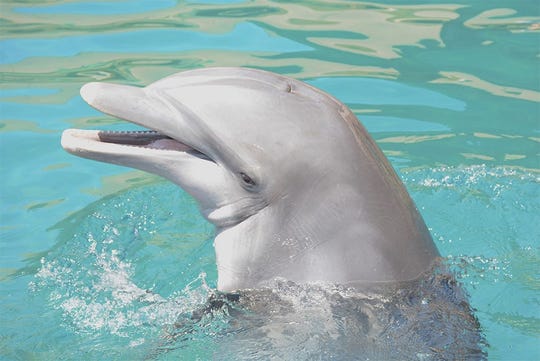 Kai, the most recent dolphin to die at Dolphinaris Arizona. (Photo: Dolphinaris)

Kai was the fourth dolphin to die at the facility since it opened in October 2016 on the Salt River Reservation east of Scottsdale.

The death prompted hundreds to protest the attraction and push for change in Scottsdale last Saturday.

“We are heartbroken by the loss of our dolphin friends and are grateful to the efforts of our staff and partners during these difficult times – especially our trainers, who have given so much love, time and energy to caring for our dolphins and educating our guests,” said Christian Schaeffer de Leon, general manager, in Tuesday’s statement.

“We hope to find a long term solution for the welfare of our dolphins.”

Activist group Dolphin Free AZ, which has called for the closure of Dolphinaris and organized protests against the facility, said it was “pleased” by the decision and that it anticipated a permanent closure after the evaluation is complete.

Dolphin Free AZ co-founder Patricia Cady, in a statement released Tuesday evening, said relocating dolphins to the Arizona desert is a “failed experiment,” and called on the Salt River Pima-Maricopa Indian Community Tribal Council to revoke its land-lease agreement with the facility. She also said the council should commit to never allowing dolphins to be relocated to the desert again.

“We are awaiting news that these doors will be closed for good,” Cady said.

The Dolphinaris statement did not say how long the attraction was going to remain closed.

Winners and losers of blockbuster deal