Virginia Gov. Ralph Northam insists he was not either of the men in an offensive photo of one person in blackface and another wearing a KKK hood that showed up in his 1984 yearbook.
USA TODAY

It took Kirk Cox almost 30 years to rise from a freshman GOP member of the Virginia House of Delegates to the legislative body’s speaker.

He could jump to the governorship in a matter of weeks as the state’s top three officials, Democrats all, stagger under the weight of scandals.

“The last seven days have been tumultuous for our Commonwealth,” Cox said in a statement late Wednesday. “The revelations against and admissions by the leaders of the executive branch are disturbing.”

If all should fall, Cox would be next in line.

Larry Sabato, head of the Center for Politics at the University of Virginia, says that, if Northam does exit, he would be the state’s first governor since the Civil War not to complete his term.

But Sabato doesn’t see all three Democrats walking away.

“Speculation that all 3 statewide VA Dem officeholders will resign is overwrought,” Sabato said on Twitter. “One or more will survive. VA Dems won in an anti-Trump landslide in 2017. They’re not going to turn government over to a pro-Trump GOP House Speaker.” 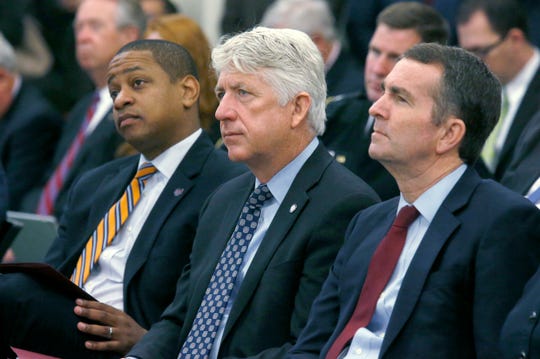 John McGlennon, professor of government at the College of William and Mary, agrees that Democrats will be unwilling to yield power to the GOP after winning an election mandate in November 2017. That preference would more likely be overturned if the bad behavior took place while the three were in office, he said.

McGlennon told USA TODAY the scandals involving Fairfax and Herring have improved Northam’s chances of political survival – but not much.

If the accusations against Fairfax are not corroborated and no other accusers come forward, the lieutenant governor is perhaps most likely to be serving as governor when the dust clears, McGlennon said. And he believes Fairfax’s race – African American –and the confirmation of Brett Kavanaugh to the Supreme Court will play a role.

“You are a white man accused by multiple people of inappropriate sexual action and you get a Supreme Court post for life,” McGlennon said. “But if you are a black man and accused without corroboration of an incident that you deny, you are forced out of office?”

Virginia’s tumult began Friday with revelations that Northam’s 1984 medical school yearbook page contained a photo of one person in blackface and another in Ku Klux Klan robes. Northam quickly apologized – then the next day said he wasn’t in the photos. He did, however, admit donning blackface for a Michael Jackson dance party more than 30 years ago.

Northam’s jumbled explanations prompted an avalanche of calls for his resignation from leading Democrats and Republicans.

Fairfax is facing accusations of sexual assault dating back to the 2004 Democratic National Convention. His accuser, Vanessa Tyson, is a political science professor at Scripps College in California.

“What began as consensual kissing quickly turned into sexual assault,” she said in the statement issued by her lawyers Wednesday. She said he physically forced her to perform oral sex.

Fairfax said the accusations against him are false and that the entire encounter was consensual.

Also on Wednesday, Herring admitted that he, too, once wore blackface in the 1980s. “This was a one-time occurrence, and I accept full responsibility for my conduct,” he said in a statement.

The developments have put Virginia’s Democratic leadership under an intense nationwide spotlight – and Cox in position to become governor if the others step aside or are pushed out.

More: Ralph Northam scandal: How did we get here

Marvin Kirkland “Kirk” Cox is a married father of four sons. He retired from teaching after 30 years in the classroom, serves as a deacon in his Baptist Church in Colonial Heights, 25 miles south of the state Capitol in Richmond.

Cox was able to become speaker only after fellow Republican David Yancey’s name was drawn from a ceramic bowl in January 2018. Yancey and Democratic challenger Shelly Simonds had tied in the November 2017 election. The drawing broke the tie, Yancey claimed the 94th district seat in Newport News, and the GOP retained its majority by 51-49.

In his role as speaker, Cox is the plaintiff in a legislative redistricting case with deep racial implications. A federal judge previously ruled in favor of Democrats who say the legislative maps were drawn to pack African Americans into 12 districts to provide Republicans the advantage in many more surrounding districts.

The case is bound for the Supreme Court, although last month Cox announced support for a plan that would set up a bipartisan commission to redraw the districts.

Shortly after the Northam scandal broke, Cox called for the governor to resign. Late Wednesday, he called for a “full airing of the facts” surrounding the accusations against Fairfax.

And Cox appeared to call for Herring’s resignation, saying that the attorney general “should adhere to the standard he has set for others or he loses credibility.” Herring previously had called for Northam’s resignation.

President Trump weighed in on the Virginia’s political chaos on Thursday, tweeting: “Democrats at the top are killing the Great State of Virginia. If the three failing pols were Republicans, far stronger action would be taken. Virginia will come back HOME Republican) in 2020!”

More: In blackface controversy, Virginia remains haunted by its Confederate past 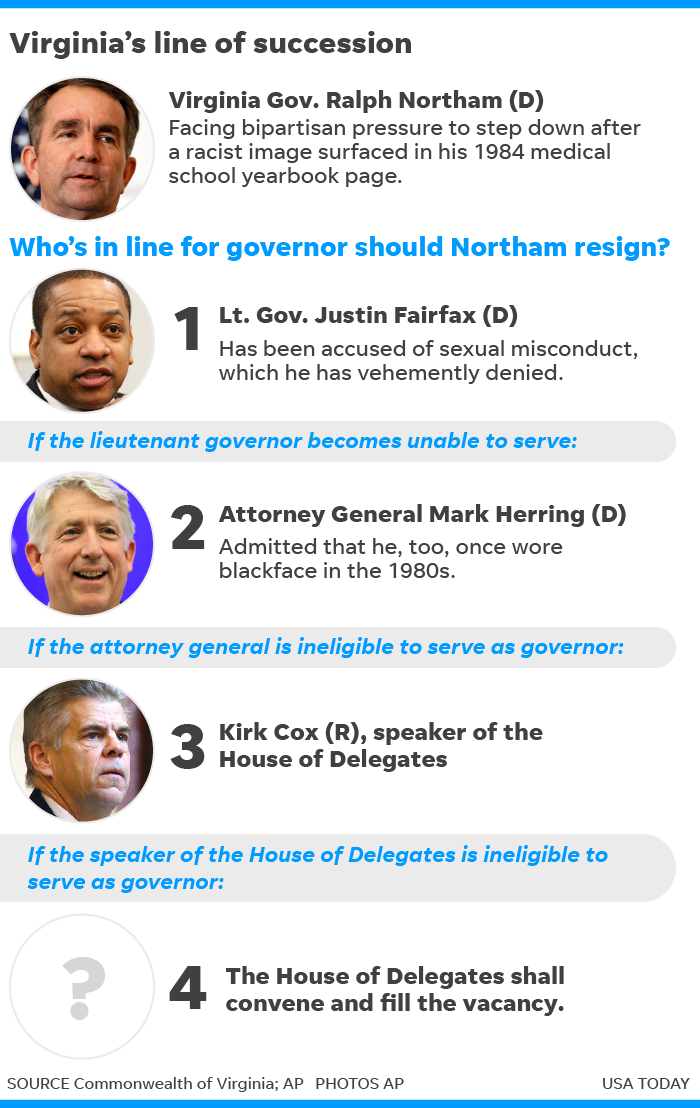