EAGLE PASS, Texas — A golf cart meandered in the fairway on a mild and sunny afternoon.

Birds chirped at the breeze as the golfers made their way through the holes Wednesday, Feb. 5, 2019, at the Eagle Pass Municipal Golf Course.

As golfers played along the banks of the Rio Grande, pickups were positioned behind them to protect the U.S. border.

A caravan of about 1,800 migrants, about 80 percent from Honduras, consisting of men, women and children, arrived Monday, Feb. 4, 2019 in the Mexico city of Piedras Negras, Coahuila. Directly on the other side of the border from Eagle Pass.

“Normally you see the Border Patrol, but it’s usually peaceful. You never see troopers, soldiers and patrols on horses and the patrol on the other side of the river,” said Eagle Pass resident Gus Jimenez.

Jimenez plays about twice a week at the golf course situated between the city’s two international bridges.

“Occasionally you’ll see people try to cross but it doesn’t happen often and Border Patrol is here,” he said.

To combat the influx of migrants, the Department of Homeland Security and Customs and Border Protection has increased security while the Port of Entry is continuing to process traffic at the border.

More: New migrant caravan has left Honduras bound for the US amid government shutdown

“We continue to facilitate trade and travel with as busy as we are, it’s always in the front of our minds to process to cars, process trucks and process train into the United States,” said Port Director Paul Del Rincon, Eagle Pass Port of Entry.

Rincon said they are working with multiple agencies and with Mexican officials to ensure the facilitation of trade and travel. Rincon said they are well prepared for an arrival of a caravan, to include operational readiness exercises and stationing Border Patrol along the river.

About 500 Texas state troopers, 50 reserve deputies from across the state and 250 active duty military were dispatched to the area.

“At this time the system is at total capacity at all points of the process and the status quo is not sustainable and the situation demands action at a variety of fronts,” Rincon said.

Rincon asked asylum seekers to be patient and follow the process. He said interviews take about 2-3 hours and the agency processes about 16 people a day at a port.

“We have never seen anything like this, we have seen family groups trying to come, but never anything organized like this,” said Maverick County Sheriff Tom Schmerber.

Schmerber said he is preparing his deputies and they are ready to assist Border Patrol, but his main objective is to continue operations in the county that’s home to Eagle Pass and just over 58,200 people.

“We still have to patrol the local areas, because crime doesn’t stop,” he said. 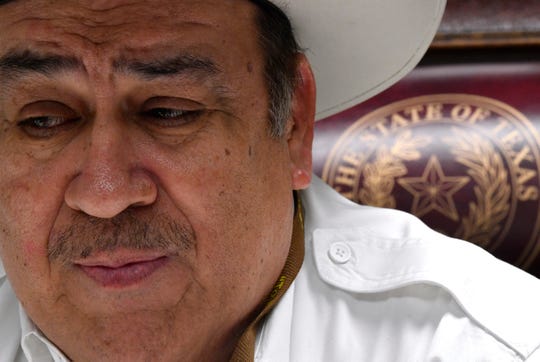 Schmerber visited the migrants in Mexico and most of them are trying to come through Eagle Pass to go north – as north as Minnesota. They don’t want to wait in Mexico, and seemed impatient of a process that might take 5-6 months, Schmerber said.

Families seeking asylum will probably follow the process, Schmerber said, but if criminals get involved and organize people to rush the gates, they can get through the border.

“Whoever we don’t catch here will go on to San Antonio or Houston. We are the front lines,” he said.

A U.S. Customs and Border Protection agent looks through binoculars while standing atop an armored vehicle beneath the Camino Real International Bridge in Eagle Pass Wednesday Feb. 6, 2019. A caravan of Central American migrants has arrived in Piedras Negras and border law enforcement officials have increased their presence in response. (Photo: Ronald W. Erdrich/Reporter-News)

Jimenez and his golf partner, Rudy Muniz, weren’t worried and felt safe continuing their weekly tee time ritual. Half the members of the golf course are from Piedras Negras, he said.

“We go there for shopping, they come here to play and we have good relationship with them,” Jimenez said.

At the other edge of the golf course, a black steel fence stands imposing across the landscape.

The fence has several gates that are patrolled and can be locked as necessary. Schmerber said he and many other county sheriffs along the border prefer to have money rather than a wall.

“The wall will take years to build, and the problem is right now,” he said. “We need the money to buy technology, to hire deputies to deal with things right away.”

He said illegal entry, drugs and terrorists are a problem right now. A wall built later will not change the situation and will leave the county without assistance.

“Illegals will still find a way to get through, if it’s over, under or through it,” Jimenez said.

The golfers packed up their clubs as the sun began its descent. People continued to travel across the international bridges — some returning from spending the day shopping or with their families — and another day turned to dusk on the Texas-Mexico border.

More: Immigrants on hunger strike being force-fed at ICE detention center in Texas

2018 was a catastrophic year for U.S. weather