For the 61st annual Daytona 500, it will be sophomore William Byron leading the field to the green flag. The pole is the first of Byron’s Monster Energy NASCAR Cup Series career and comes in his first race with Chad Knaus as his crew chief.

“The Axalta Chevy was really fast,” said Byron. “Credit to Chad and all the guys. It’s been a great offseason. We’re prepared. We’re ready. This is kind of the first step of our process together, so hopefully, it goes well next Sunday. We can kind of chill out throughout the Duel races and learn a little bit. I’m looking forward to it. This is awesome.” 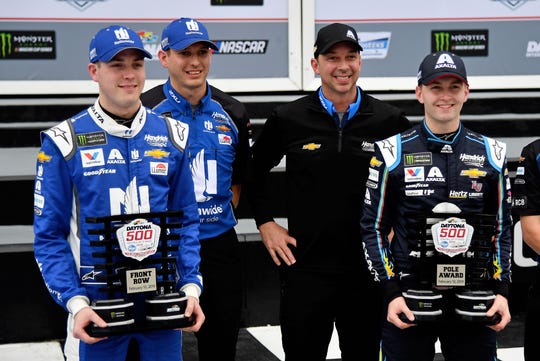 Byron will be joined on the front row by HMS teammate Alex Bowman. Bowman was the polesitter in last year’s Daytona 500 and clocked in at 194.154 mph (46.355 seconds).

With Byron’s lap, it also gives Chevrolet its 700th pole in the Cup Series.

Byron and Bowman are the only two drivers with their starting spots locked up for the Feb. 17 race. The rest of the 40-car field will be set Thursday in the Gander RV Duel races.

Tyler Reddick and Casey Mears were the fastest of the teams without a charter, guaranteeing their spots in the Daytona 500.

Pre-qualifying ejections: Austin Dillon, Chase Elliott, and Ty Dillon will be without their car chiefs for the remainder of Speedweeks at Daytona.

The No. 3, 9 and 13 cars each failed pre-qualifying inspection twice Sunday morning. That results in the ejection of their car chiefs and the loss of 15 minutes in final practice on Saturday, Feb. 16.

All three cars passed inspection on the third time through, and the drivers did get to make a qualifying run for the 61st Daytona 500.

Daytona 500 lineup: The Gander RV Duel races, which will set the field for the Daytona 500 behind the front row of William Byron and Alex Bowman, are Thursday (7 p.m. ET on) Fox Sports 1.

Blackface shows how deeply rooted anti-black racism is in America

Bob Schieffer reflects on the legacy of John Dingell