Harper and the Giants met in the free agent slugger’s hometown of Las Vegas last week.

“I think it’d be a huge addition for us,” Bumgarner said Tuesday as the Giants opened spring training. “He’s obviously a superstar in the game, a young player. I think everybody in here would be pretty damn excited to have him.”

“I think anybody who plays Major League Baseball would love to have him on their team and that’s no exception here,” Posey said. “The type of player he brings and the passion he brings to the game, if we were lucky enough for it to work out, it’d be great. 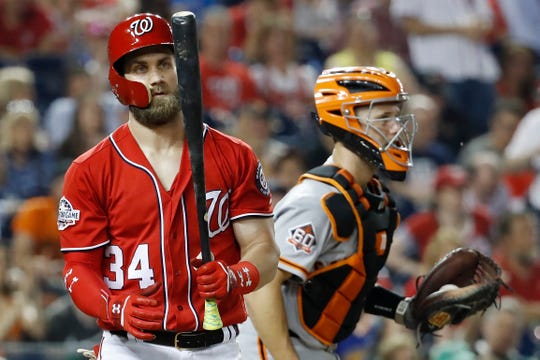 Harper during a game against the GIants in 2018. (Photo: Geoff Burke, USA TODAY Sports)

“I’ve been part of teams that we won when we probably weren’t supposed to. We’ve seen plenty of other teams do it. Obviously, some guys, like Harper, that’s going to make any team better: Bumgarner said. “That’s not to say we couldn’t do it without him. We’ve got the guys and we could do it. It’s all a mentality.”