The mother of a missing three-old boy who reported that her child disappeared in 1986 has been charged with his murder more than 30 years later, police say.

Amy Elizabeth Fleming, 60, and her then-boyfriend, Lee Luster, were at a Las Vegas swap meet with Fleming’s son Francillon Pierre, 3, in August 1986 when they told police that they lost sight of the young boy.

Police were initially suspicious of Fleming and could not find the boy, but they did not have enough evidence to make an arrest, the North Las Vegas Police Department said in a statement Monday.

But then, in 2017, when police were alerted of someone applying for a birth certificate with Pierre’s name in an attempted identity theft, detectives reviewed the case, ultimately leading to Fleming’s arrest, the department said. 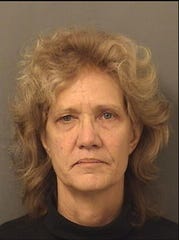 “I would love to tell you right now that we have a smoking gun. We’d love to have the body of Francillon or DNA evidence that proves something. That’s not what this case is. This is a case of a lot of little things that, put together, gives us the knowledge that Amy Fleming was involved in the homicide of her child,” Detective Steven Wiese told reporters at a Monday news conference.

Francillon Pierre, known by his nickname YoYo, was reported missing Aug. 2, 1986, from the then-Broad Acres swap meet in North Las Vegas. @NLVPD announced on Monday that his mother, Amy Elizabeth Fleming, has been charged with murder in his disappearance→https://t.co/jbgVRAv6E9pic.twitter.com/Ow10jbttKH

A key piece of evidence that police highlighted was a letter between Fleming and Luster.

Police say the couple had been arrested for child abuse in 1985 and were also arrested for obstruction of justice in 1986 when they lied multiple times to investigators during the probe of Pierre’s disappearance.

During their time in jail, Fleming wrote multiple letters to Luster, North Las Vegas Police Chief Pamela Ojeda told reporters, including one that was torn into pieces that detectives put back together.

In one of the notes, Fleming allegedly wrote: “What happened was totally unintentional, I’m sorry, I hope you know that.”

The couple moved to Florida after their release, police say. Then, on Jan. 29 this year, after police had reworked the case for a year and a half, authorities in Florida arrested Fleming, who will face charges in Nevada.

Wiese said most of the evidence in the case is the same that was collected in the initial investigation. “Part of it is just time. Over time, you look at that evidence in different ways,” he told reporters.

Pierre’s body has still not been found and police say they’re still unsure how he was killed. Wiese said authorities believe the couple’s trip to the swap meet, after which they first reported Pierre missing, was a “diversion” and that the boy was already dead. The department said in a statement that at the time of the initial investigation, neighbors said they had not seen Pierre for weeks.

Police say Fleming and Luster are married. Luster is living in Florida but police wouldn’t say whether he would also be arrested.

Detective Bob King, who is now retired, was one of the original detectives who investigated the case. He said he would testify if asked and that he now feels “a bit of closure.”

“After 32 years, this one case in my career that I always felt uncomfortable about – the fact that I could not resolve it successfully and particularly when we’re talking about a three-year-old little boy,” King said. “When Detective Wiese contacted me the other day and said we had an arrest, to say that I was overjoyed, I gotta say personally I was.”