A wall of winter weather rolling across a wide swath of the northern United States on Tuesday brought sleet, snow, ice and commuter headaches to more than 100 million people from Seattle to New York.

The storm was part of an even larger system that also brought tornado warnings to Mississippi and concerns over torrential rains, high winds and flooding to parts of Georgia, Alabama and Florida, AccuWeather meteorologist Tyler Roys said.

“This storm is unique in that it brought a significant storm to Seattle and a wintry mess to so many big cities – Chicago, Detroit, New York and Boston,” Roys told USA TODAY. “When you include the South, the storm is impacting almost every part of the United States in some shape or form.”

Over 100,000 homes and businesses were without power in Washington state alone. More than 650 flights in and out of New York’s Kennedy and LaGuardia airports were canceled or delayed. 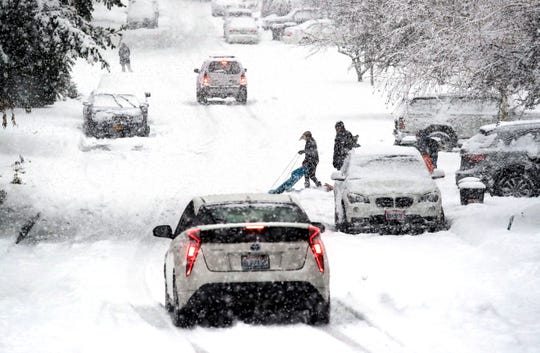 Commuters across most of the nation’s northern tier were also affected. Green Bay, Wisconsin, could see 10 inches before the snow stops. Parts of Michigan were paralyzed by freezing rain.

“Expect your drive to be at least twice as long this am,” Michigan’s Transportation Department warned Detroit commuters. “Icy rain making for tough driving conditions. SLOW DOWN!”

Parts of northern New Jersey were bracing for up to eight inches of snow and ice, and Gov. Phil Murphy declared a state of emergency for the entire state. Upstate New York and northern New England could see up to 18 inches.

In New York City, Mayor Bill de Blasio warned that morning snow was forecast to morph into a wintry mix in the afternoon.

“Please take today’s winter weather seriously,” he pleaded. “Stay indoors whenever possible, use public transit if it is available to you and check on your vulnerable neighbors.”

Areas north of Baltimore were hit with more than five inches of snow Monday topped by sleet and freezing rain Tuesday. In Philadelphia, a passenger was injured when a SEPTA bus jackknifed and crashed into a North Philadelphia home on a snowy, slick street.

Schools in Seattle and across much of the area were shuttered for a second straight day Tuesday. The city, which averages less than 7 inches of snow a year, already has seen three times that amount. Boston’s snow total since Jan. 1: 2.2 inches. Seattle: 20.2 inches.

A mix of rain and snow continued to fall Tuesday. This has been Seattle’s snowiest February on record, the National Weather Service reported.

“Here’s another statistic that sets this month apart,” the Seattle weather service office tweeted. “Including ALL months going back to 1894, there have been only been 5 months (including this one) in which 6+ inch snowfall occurred twice in the same month.”

Even Hawaii had been under siege, with 60-foot waves and wind gusts up to 191 mph that were part of a fierce weekend storm that downed power lines and felled trees.

More: There’s ‘no place on the planet’ – not even Hawaii – to escape climate change

Stonehenge, other megaliths may have originated in northwest France