For 76 years, she lay on the ocean floor, a quiet tomb for 140 sailors who died the day she sank. Now, for the first time since then, humans have laid eyes on the Hornet. 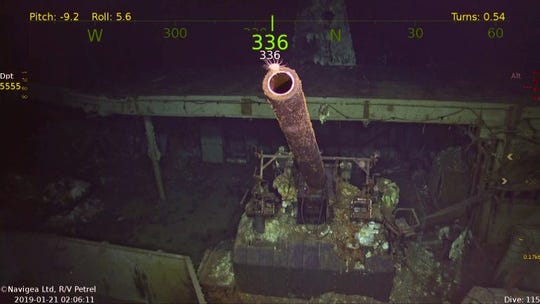 The wreck of the USS Hornet was recently discovered in the South Pacific. Here’ one of its 5-inch guns is pictured. (Photo: Vulcan, Inc.)

For 76 years, the aircraft carrier lay on the ocean floor, a quiet tomb for 140 sailors who died the day it sank.

Now, for the first time since then, humans have laid eyes on the USS Hornet, which was sunk in October 1943 during World War II’s Battle of the Santa Cruz Islands.

A research vessel discovered wreckage of the aircraft carrier in late January 2019, nearly 17,500 feet below the surface, resting on the floor of the South Pacific Ocean.

“We had the Hornet on our list of WWII warships that we wanted to locate because of its place in history … that saw many pivotal moments in naval battles,” said Robert Kraft, director of subsea operations for Vulcan, the company that discovered the World War II warship.

Vulcan was founded by the late Paul Allen, co-founder of Microsoft, and has found many other shipwrecks of that era.

The Hornet was involved in many key events of the war, including launching the famed Doolittle Raid on Tokyo. It was also a major part of the Battle of Midway.

A look at how the #USSHornet was discovered and the important role she played during WWII. pic.twitter.com/sDl2SnlWsT

When Siberia shivers, it's time to fix ships in the ice