Juarenses are returning to life after years of fear over cartel-related killings in the city.
Mark R Lambie, El Paso Times

CIUDAD JUÁREZ, Mexico – Julián Cardona remembers the dark days of this border city, when bodies littered downtown streets and friends were kidnapped or fled north to the U.S.

That was a decade ago, when feuding cartels made Ciudad Juárez one of the murder capitals of the world.

Today, Cardona, a Mexican photographer who has documented much of the last decade’s carnage, says the city is experiencing a revival: violence persists, but mostly between local drug gangs, kidnappings are rare and, most notably, people are no longer afraid to leave their homes.

“Not everyone’s talking about crime … There’s more people out on the street,” he said recently while enjoying a breakfast of fried eggs and coffee in a café near downtown. “Things have definitely improved.” 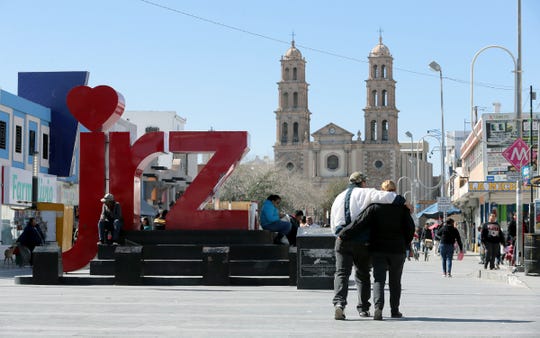 A couple walks arm in arm through downtown Juarez Tuesday, February, 12, 2019. Life has returned to the streets of Juarez after years of cartel killings and extortion kept Juarenses inside their homes. (Photo11: Mark Lambie / El Paso Times)

Ciudad Juárez, a city of 1.4 million people, sits across the Rio Grande from El Paso, where President Donald Trump led chants of “Finish that Wall!” at a rally Monday of more than 6,000 supporters, and warned of dangers lurking beyond the border. Days later, Trump declared a national emergency to access billions of dollars to pay for his long-promised border wall.

“We’re going to confront the national security crisis on our southern border, and we’re going to do it one way or another,” Trump said Friday as he declared the emergency from the White House Rose Garden.

Even as many along the border have decried Trump’s calls for a wall and stressed the border’s safety, places like Ciudad Juárez have struggled to keep violence at bay.

El Pasoans for generations have lived in a symbiotic relationship with Juárez, sharing families and economies. Today, the city is a major trading partner for Texas and a key cog in the U.S. economy, said Jon Barela, chief executive of the Borderplex Alliance, an El Paso-based economic development and advocacy group.

Juárez is home to more than 360 manufacturers, from makers of U.S. car parts to semiconductors and surgical equipment, and sees more than $76 billion worth of trade with the U.S. each year, according to the alliance. It’s also home to more than 70 Fortune 500 companies, Barela said. 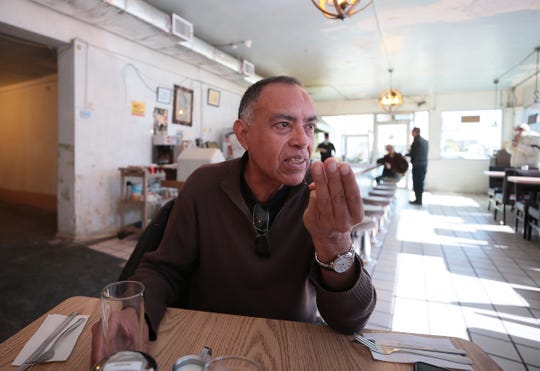 The drop in violence has helped the city strive, he said.

“Ciudad Juárez is undergoing a renaissance,” Barela said. “I’m hopeful that the really bad days of violence that took place there will never come back.”

But the shadows of Juarez’s violent past linger. Starting around 2008, warring Sinaloa and Juárez cartels, vying for control of the city’s lucrative transnational drug trade, touched off a murder wave that left bodies strewn across downtown streets and where gang lords hung the beheaded corpses of rivals from highway overpasses. Kidnappings and killings soared. In 2010, the city’s murder rate reached more than 230 murders per 100,000 residents – higher than even Baghdad at the time.

The federal government dispatched military troops to the city to quell the violence but the federal forces were accused of conducting their own extrajudicial killings and kidnappings, according to international human rights groups. More than 5,000 federales patrolled Juarez’s streets, many of them riding the backs of pickup trucks, toting assault rifles and hiding their faces behind balaclava masks to protect their identities from criminal groups.

The killings in Juárez continued, peaking at 3,058 in 2010. The violence then began to drop, sliding to 429 killings in 2014 and 308 in 2015, according to stats compiled by Molly Molloy, a research librarian and professor at New Mexico State University.

Not coincidentally, the violence in Juárez began to recede when the federal troops left the city around 2011, Cardona said.

Even as Juárez struggled with its eye-popping murder wave, El Paso, just across the border, experienced virtually no crime spillover. In 2010, at the height of the Juárez killings, El Paso recorded just five homicides, according to the El Paso Police Department.

Last year, Juárez’s murders again began to rise: Juárez police recorded 1,259 homicides in 2018, including a murderous spasm of 182 deaths in August, according to the NMSU stats. In the same year, El Paso counted just 23 homicides.

Juárez’s uptick in violence comes as Mexico is experiencing its own murder spike: Last year, the country counted 33,341 murders, its highest tally in more than two decades.

But Juárez residents say the city’s recent spate of killings feels much different from the violence that gripped the city a decade ago. A key difference: locals are not being targeted. 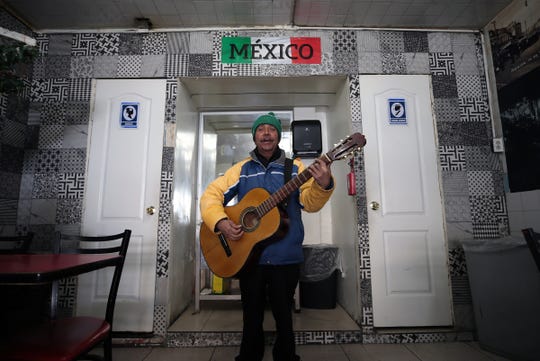 A musician performs after strolling into El Taquito Mexicano in Juarez. Street musicians and Juarenses in general have returned to the streets of Juarez after years of fear over cartel killings in the city. (Photo11: Mark Lambie / El Paso Times)

“Everyone was a target: doctors, architects, any type of business, barrio pharmacies, tortillerias,” Cardona said of last decade’s violence. “People are not targets like before. You don’t hear about extortion or kidnappings of people in your inner circle.”

On a recent mid-week afternoon, streams of tourists and locals clustered in the plaza outside the Nuestra Señora de Guadalupe Cathedral in central Juárez, perusing folding tables covered in books or pirated DVDs, or munching on roasted corn or churros, fried dough powdered with sugar.

Just a few years ago, the open-air market was nearly deserted, as people went straight home after work to hide from the violence, said David Burciaga, who runs a stall selling women’s blouses and girls’ dresses. Businesses closed and many of his counterparts left to the U.S., he said. That changed about seven years ago.

“Though it’s still a city with violence, today criminal groups don’t get mixed up with merchants or citizens,” Burciaga said. “It’s more between them.”

He added: “We’re no longer afraid. We don’t have to hide. We could work. The economy has been growing.”

But that false sense of security is dangerous in a city grappling with an alarming spike in violence, said Howard Campbell, a University of Texas at El Paso anthropology professor and author of Drug War Zone: Frontline Dispatches from the Streets of El Paso and Juárez.

The current violence stems from fighting between local street gangs, such as the Aztecas, and police, not transnational cartels like before, Campbell said. Victims tend to be confined to gangs and police, not average citizens, he said.

Last month, a series of coordinated attacks wounded at least eight Juárez police officers when gunmen ambushed patrol vehicles, fired at a police station and set a public bus ablaze, prompting the U.S. consulate in Juárez to issue a security alert to U.S. citizens in Juárez and nearby Chihuahua City.

Another worrying aspect to the recent fighting: The emergence of methamphetamine, which for years was not prevalent in Juarez, Campbell said. “Meth is the new drug on the scene and does seem to be associated with more extreme violence,” he said. 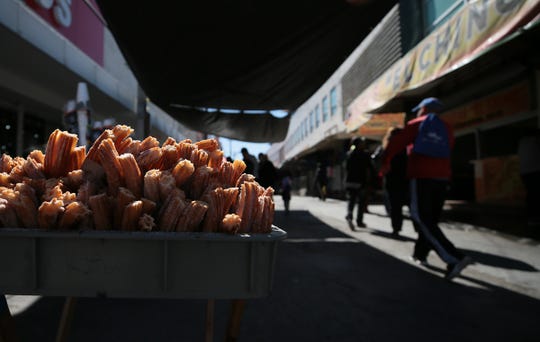 Juarenses stroll through the Mercado Reforma in downtown Juarez past a cart selling churros on Tuesday, February, 12, 2019. Life has returned to the streets of the embattled city after years of cartel killings. (Photo11: Mark Lambie / El Paso Times)

For now, all eyes are on how newly-elected President Andrés Manuel López Obrador will tackle Mexico’s ongoing violence. In speeches, he’s vowed to do things differently from his predecessors. “You cannot fight violence with violence,” Obrador said in August during a security forum in Juárez.

Cardona, the photographer, said he hopes it’s not a repeat of last decade’s strategy – with the same violent results.

“The logic is the same,” he said. “When you have external factors, like federal police, things can change for the worse.”