A Florida sheriff’s office says a suspect woman who threatened one of our deputies with a visit from the KKK, a cross burning in his yard and harm to him and his family.”

A suspect allegedly made racist threats toward a Florida cop during a drunk driving arrest, according to a video released by police this week.

The suspect “threatened one of our deputies with a visit from the KKK, a cross burning in his yard and harm to him and his family,” the Volusia County Sheriff’s Office said.

In the video, a woman can be heard making repeated racial comments and threats.

“Ain’t a damn thing wrong with a burning cross in your yard, is there?” she says in the video.

“My KKK friends will burn your family. Should never be here in the first place. Ever been whipped on a whipping post?” the female says. 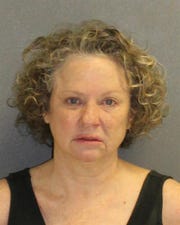 The suspect was identified by WFTS, a Tampa Bay television station, as Julie Edwards, 53. A  statement from the sheriff’s office identified Edwards as the subject by her last name.

Online records show that Edwards was arrested on Feb. 8 for several charges, including making a threat against a law enforcement officer and driving under the influence.

The deputy involved in the incident “is of African-American descent and knows the history behind the KKK and the pain and torture they have caused and still cause to African-Americans today,” Volusia County Sheriff’s Office said in a Tuesday Facebook post.