During an exclusive interview with Robin Roberts, ‘Empire’ actor Jussie Smollett gets emotional while talking about his reported attackers in Chicago.
USA TODAY

CHICAGO – Chicago police were pursuing “additional detective work” Sunday amid claims an attack on actor-singer Jussie Smollett may have been faked.

Two brothers told investigators they were paid by the “Empire” actor to stage the attack, according to a person familiar with the situation but not authorized to speak publicly. The person asked not to be identified because of the sensitivity of the ongoing investigation.

“We can confirm that the information received from the individuals questioned by police earlier in the Empire case has in fact shifted the trajectory of the investigation,” the Chicago Police Department said in a statement Saturday. “We’ve reached out to the Empire cast member’s attorney to request a follow-up interview.”

Smollett’s attorneys later issued a statement saying the actor would continue to cooperate with police but felt “victimized” by reports that he might have been involved in the attack.

“Nothing is further from the truth and anyone claiming otherwise is lying,” the statement from attorneys Todd Pugh and Victor P. Henderson said.

Smollett, who is black and gay, said he was attacked while walking home through Chicago’s Streeterville neighborhood late last month. He told police masked men tied a noose around his neck, poured bleach on him and yelled the slurs and “MAGA country!” 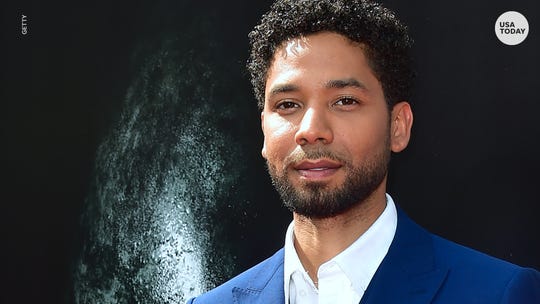 Police also found records in the Chicago home of one of the men that showed they purchased rope from a hardware store that was used in the alleged attack, the source told USA TODAY.

Donald Trump Jr. targeted Smollett on Twitter after the revelations, saying the actor “tried to manufacture a hate crime to make Trump supporters look bad and most of the media not only uncritically accepted his lies as facts for weeks, but attacked those who questioned the validity of his false story.”

Police had questioned the two brothers, who are of Nigerian descent and have long lived in Chicago, earlier this week after taking them into custody at O’Hare International Airport upon returning from international travel. They initially classified the brothers as suspects in the Jan. 29 attack on Smollett.

Late Friday, the men were released from custody without charges. Anthony Guglielmi, Chicago police’s chief spokesman, cited “new evidence” as the reason for the men’s release.

One of the men is Smollett’s personal trainer who he hired to get him physically ready for a music video, the statement from Smollett’s attorneys said.

“It is impossible to believe that this person could have played a role in the crime against Jussie or would falsely claim Jussie’s complicity,” the statement said.

Earlier this week, Chicago’s ABC affiliate reported that investigators believed that Smollett staged the attack because he was being written off the show.

FOX Entertainment and 20th Century FOX Television, which produces the Chicago-based family drama, pushed back against the notion that Smollett was being written off the show.

“The idea that Jussie Smollett has been, or would be, written off of ‘Empire’ is patently ridiculous. He remains a core player on this very successful series and we continue to stand behind him,” the statement said.

Since launching the investigation, police consistently described Smollett as a victim of an attack.

More: Jussie Smollett’: I saw the rope ‘and I started screaming’

Asked by USA TODAY Saturday if investigators still believe Smollett was a victim of an attack, Guglielmi stopped short of categorizing how investigators currently view the actor.

“We have some new information that we would like to corroborate,” he said.

Smollett said in an interview Thursday with ABC’s “Good Morning America” that those doubting him “don’t even want to see this is the truth.”

“It feels like if I had said it was a Muslim, or a Mexican, or someone black, I feel like the doubters would’ve supported me a lot more, and that says a lot about the place that we are in our country right now,” he said.