February will grace us with the closest full moon of the year, making it look bigger and brighter than usual.
Buzz60

Whether you call it super, snow or full, the biggest, brightest moon of the year is coming to a sky near you overnight tonight.

A supermoon occurs when the moon is as close as it ever gets to Earth. On Tuesday, our moon will “only” be about 221,000 miles from Earth, which is about 17,000 miles closer than average.

The moon’s distance from the Earth changes because its orbit isn’t a circle. When the moon is closest to Earth, astronomers call it “perigee,” said Hanneke Weitering of Space.com. When the full moon coincides with perigee, you’ve got a supermoon.

Bigger and brighter than a typical full moon, the term “supermoon” was coined in 1979 by astrologer Richard Nolle.  It’s become an increasingly more popular and media-friendly term in the decades since then.

The moon’s closeness to Earth, naturally, makes it look extra close and extra bright – up to 14 percent bigger and 30 percent brighter than a full moon at its farthest point from Earth, known as the apogee, NASA said.

Although this supermoon (and full moon) will officially occur on Tuesday morning, you don’t have to wait for a specific moment to catch all the fun. The moon will appear plenty bright, big and mostly full for the entirety of Monday and Tuesday nights – barring pesky clouds.

It’s especially big just as it rises above the horizon: This is called the “moon illusion” and it’s a way that your brain processes objects on the horizon, said Dean Regas, astronomer for the Cincinnati Observatory. “The moon isn’t actually bigger, it just looks like it,” he said. “This perceived increase in size happens whenever you see the moon, regardless of its phase, near the horizon.”

The supermoon will make the moon seem even bigger.

If you miss this month’s supermoon, there will be another one on March 21, EarthSky said, but it won’t be quite as big or spectacular as this one. 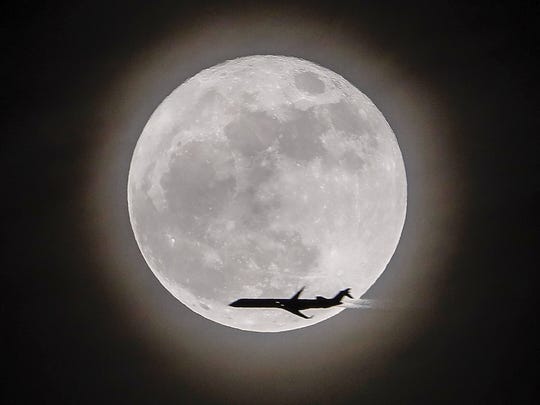 An airplane crosses in front of the supermoon in Avondale Estates, Georgia, on Dec. 3, 2017. (Photo11: Erik S. Lesser, EPA-EFE)

The full moon this month is also nicknamed the snow moon.

For millennia, people across the world, including Native Americans, named the months after nature’s cues. According to the Old Farmers’ Almanac, full moon names in our part of the world date back to the Native Americans who lived in the northern and eastern U.S. Each full moon has its own name.

“The tribes kept track of the seasons by giving distinctive names to each recurring full moon,” the almanac said. “Their names were applied to the entire month in which each occurred.”

This month it’s the snow moon due to the month’s typically heavy snowfalls. Calling February’s full moon the snow moon is right on target: On average, February is the USA’s snowiest month, according to data from the National Weather Service.

The Old Farmer’s Almanac also said some tribes referred to February’s moon as the “hunger” moon, because harsh weather conditions made hunting difficult.