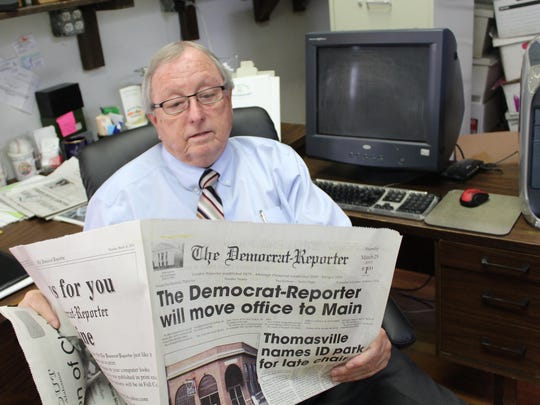 Democrat-Reporter Publisher Goodloe Sutton reviews an article about the paper moving to a new location. (Photo11: Alvin Benn/Special to the Advertiser)

MONTGOMERY, Ala. –The editor of a small-town Alabama newspaper published an editorial calling for “the Ku Klux Klan to night ride again” against “Democrats in the Republican Party and Democrats [who] are plotting to raise taxes in Alabama.”

Goodloe Sutton — who is the publisher of the Democrat-Reporter newspaper in Linden, Alabama — confirmed to the Montgomery Advertiser on Monday that he authored the Feb. 14 editorial calling for the return of a white supremacist hate group.

“If we could get the Klan to go up there and clean out D.C., we’d all been better off,” Sutton said.

Asked to elaborate what he meant by “cleaning up D.C.,” Sutton suggested lynching.

“We’ll get the hemp ropes out, loop them over a tall limb and hang all of them,” Sutton said. 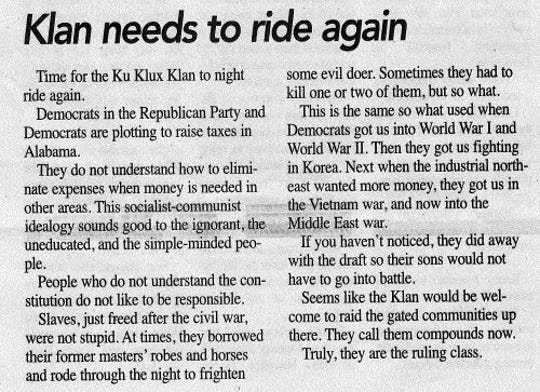 The editor and publisher of a small-town Alabama newspaper last week called for the resurgence of the Ku Klux Klan to “clean up D.C.” (Photo11: Yawn, Andrew)

When asked if he felt it was appropriate for the publisher of a newspaper to call for the lynching of Americans, Sutton doubled down on his position.

“… It’s not calling for the lynchings of Americans. These are socialist-communists we’re talking about. Do you know what socialism and communism is?” Sutton said.

In the newspaper editorial, Sutton wrote:

Democrats in the Republican Party and Democrats are plotting to raise taxes in Alabama. They do not understand how to eliminate expenses when money is needed in other areas. This socialist-communist ideology sounds good to the ignorant, the uneducated, and the simple-minded people.

When asked if he recognized the KKK as a racist and violent organization, Sutton disagreed, comparing the Klan to the NAACP.

“A violent organization? Well, they didn’t kill but a few people,” Sutton said. “The Klan wasn’t violent until they needed to be.”

Sutton said he didn’t know any Klan remaining in the area, stating most died out after the 1960s.

The editor said he welcomed people to call him, write him a letter or boycott him.

Sutton, who has worked at the paper since 1964, inherited the publication from his father. Sutton and the newspaper received national acclaim in the 1990s for their reporting on a corrupt local sheriff.

In 2015, he ran a headline titled: “Selma black thugs murder Demopolite Saturday night.” At that time, the paper had about 3,000 subscribers.

Linden is located about 100 miles due west of Montgomery near the Mississippi border.

“As a newspaper editor myself it’s disturbing to see this type of editorial printed,” Brownlee said via email. “Granted, I’m the editor of a student newspaper, but all newspapers should be held to the highest ethical and moral standards. Editorials should be about new ideas, constructive criticism and opinion backed up by facts. To call for the return of domestic terrorism — no matter its form — is counterproductive and wrong. It’s important to welcome and encourage differing opinions, but violence is never right.”

The Advertiser contacted the Alabama Press Association, the state trade association for newspapers in the state, to inquire whether or not Sutton and the Democrat-Reporter were members.

“We do not agree with the opinion,” said Felicia Mason, APA executive director. “However, APA is not a policing agency. We simply have no authority over what our member newspapers publish.”

Third migrant dies in Border Patrol custody in as many months