What I’m Hearing: MLB insider Bob Nightengale discusses how the Padres were able to land Manny Machado and how it impacts the market for Byrce Harper.
USA TODAY

PEORIA, Ariz. — They heard the rumors for weeks and the figures leaked out over the weekend, but still, the San Diego Padres didn’t quite believe Manny Machado was coming out West.

Then, right after the morning team meeting Tuesday, in their first full-squad workout, the news hit like a lightning bolt.

Machado was coming to the Padres.

The Padres’ rebuild got a can of Red Bull with a shot of adrenaline.

Finally, after eight consecutive losing seasons and a playoff drought dating back to 2006, the Padres have got an honest-to-goodness major-league baseball team that should soon be competitive.

Funny what one man and the biggest free agent contract in baseball history will do for a team’s image.

“The expectations around here have been low,” Padres outfielder Wil Myers said. “The Padres ownership has said since Day 1 of the rebuild process that we’re here to win. The expectations will be higher, which we want.

“We haven’t had high expectations here in a while.”

MANNY GOES WEST: What to expect from Machado in San Diego

Sure, they still are young and are short on pitching. The Los Angeles Dodgers aren’t going away. The Colorado Rockies still are a force.

But, oh, do they ever have a franchise player – certainly with the potential to be the best Padre since Hall of Famers Tony Gwynn and Trevor Hoffman.

And just like that, Hosmer, who signed a franchise-record eight-year, $144 million contract last year, now is the second-richest Padre

“I wouldn’t mind dropping to No. 3,” Hosmer said, well aware that Bryce Harper is still unsigned. 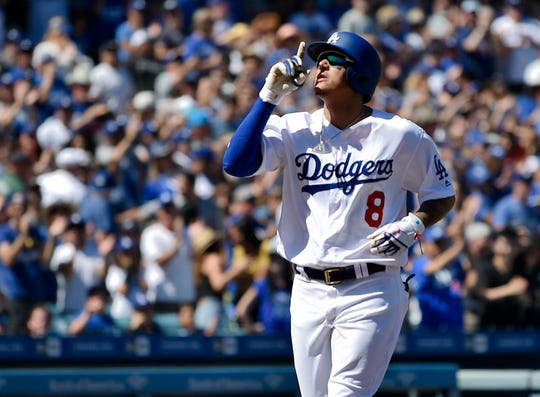 It’s probably only a matter of days that Machado’s record will stand. Harper and agent Scott Boras have been deep in negotiations with the Philadelphia Phillies, who clearly are the favorite.

The White Sox haven’t engaged in talks with Harper for months. The San Francisco Giants are interested only in a short-term deal. The Washington Nationals say their previous 10-year, $300 million offer is no longer on the table.

As for the ripple effect of Machado’s contract, it certainly helps establish the value for Colorado Rockies third baseman Nolan Arenado. He has been in deep talks with the Rockies about an extension before he’s eligible for free agency after the season.

It also provides a blueprint for the Los Angeles Angels and Mike Trout, who’s two years away from free agency. Angels owner Arte Moreno says they have discussed internally trying to extend Trout, and know that it’s going to cost way more than $300 million.

The White Sox and Phillies each were also in the market for Machado, but refused to guarantee $300 million. The White Sox, after being told that the Padres’ offer was $280 million over the weekend, raised their seven-year offer to $250 million over eight years with two option years. The deal could have been worth $320 million in total, but the $35 million options would have been vesting based on plate appearances. The Phillies were believed to be in the same ballpark, but also refused to go higher.

“If the reports are true,” Phillies GM Matt Klentak told reporters in Clearwater, Fla. on Tuesday, “this contract will exceed our valuation. Sometimes, you have to walk away.”

The White Sox believed they were the front-runners for Machado, knowing he was expected to make a decision by Wednesday, until they heard the news.

“It’s disappointing, I’d be lying to you if I said anything other than that,” White Sox president Ken Williams said. “That level wasn’t feasible to us because we still have to project putting together a total winning roster and keeping the young players that will ultimately earn into greater dollars themselves.

“So, when you look at the big picture without having to sacrifice some of them, we could not go to that level.”

The Padres – who have finished 23, 33 and 25.5 games out of first place the past three seasons – didn’t flinch at the price tag. They actually weren’t even pursuing Machado until discovering he wasn’t getting nearly the money they envisioned.

They jumped in last month. GM A.J. Preller met with Machado and his wife Yainee in Miami a week ago – and voila!

Padres owners Peter Seidler and Ron Fowler, who promised Myers and Hosmer when they signed their long-term contracts that they were going to spend to win, delivered.

“They said time and time again they’re going to give us the pieces we need,” Hosmer said. “They were going to provide the veteran leadership and the youth that comes up through the farm system, and that’s exactly what they’ve been doing. It’s only Year 2, but it’s extremely fun to be part of, and today made it a lot more fun, that’s for sure.

“We’re at a point in time now that everybody knows we want to win, and we’re serious about it. It’s not just talking. It’s not trying to sell you guys on something. It’s actions going out and doing something.”

“The beautiful thing now is that it’s on us to go out there and perform, and do what we can do.”

Certainly, as Machado’s contract proved, his comments and play during last year’s postseason was immaterial. No one was overly concerned. The talent outweighed any issues of hustle or perceived dirty play.

“It’s motivating. We want to win. That’s the goal. No matter what it takes.”

There will be more expectations now on the Padres, certainly on Machado. You’re not the highest-paid player in the game without a target on your back.

Machado is ready to embrace it.

“Manny has had to deal with stuff since he was 15 years old, from being a high draft pick to making the big leagues so young,” said White Sox outfielder Jon Jay, a close family friend, “and he has handled every transition seamlessly. So I expect the same thing right now.”

Only time will tell, but the Padres finally are back on the baseball map, with catcher Austin Hedges and others unable to contain their excitement.

“We can be scary,” Myers said. “Definitely scary.”

Is "zombie deer disease" a threat to humans?