SportsPulse: For The Win’s Ted Berg breaks down the game of Manny Machado and explains why he’s worth the hefty price tag.
USA TODAY

The All-Star infielder has agreed to a monumental 10-year, $300 million deal with the San Diego Padres, the single biggest free agent contract in baseball history, a person with knowledge of the situation told USA TODAY Sports.

The person spoke on the condition of anonymity because the deal had not yet been announced.

Machado has averaged 36 home runs and 96 RBI over the past four seasons and the two-time Gold Glover is expected to return to third base with San Diego after playing shortstop in 2018.

San Diego may not have been the most obvious landing spot for Machado when the winter began, but all in all, it’s a good deal for everyone involved as the Padres look to get back to the postseason for the first time since 2006.

Here’s a look at what Machado is getting himself into: 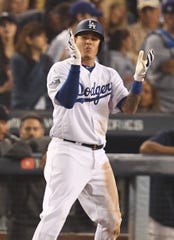 Well, obviously, they flashed the cash. Machado agreed to a 10-year, $300 million deal — the largest free agent contract ever.

Aside from the financial incentives, Machado finds himself in a pretty favorable situation in San Diego. The Padres have had one of the top farm systems in the game for a few years now (10 players in MLB.com’s top 100 prospects for 2019) and all that talent is starting to graduate to the majors.

FOR THE WIN: Twitter was stunned by Manny Machado’s deal with the Padres

Are the Padres going to be good?

Probably not this year, but the Machado signing certainly accelerates the timetable. Adding Machado in free agency will also make it more palatable for the Padres to part with some of those prospects in trades for proven commodities moving forward.Expect to see some major signs of progress in 2019 and don’t be surprised if the Padres are a trendy pick to make some noise in 2020.

How does Machado fit with the Padres?

San Diego had a glaring hold at third base and Machado should fill that void for years to come. Machado at third keeps shortstop open for top prospect Fernando Tatis Jr. down the road, and at that point Luis Urias will presumably move to second base.

Bottom line: Is this a good move for Machado?

Yes. While his numbers will probably decline a little in Petco Park, Machado won’t face the kind of scrutiny in San Diego that he might have elsewhere and the foundation is there for long-term success with the Padres.