HAGATNA, Guam –Two leading U.S. organizations protecting victims and documenting the sexual abuse crisis in the Catholic priesthood have called on Pope Francis to sustain the guilty verdict on Archbishop Anthony S. Apuron in a case involving sexual abuse of minors, and to defrock or expel him from the priesthood.

“It is wrong for Pope Francis to leave Guam Catholics twisting in the wind and waiting to discover the fate of Archbishop Apuron, especially since it has been nearly a full year since the archbishop was found guilty of abusing children,” said Zach Hiner, executive director for the Missouri-based Survivors Network of those Abused by Priests, the world’s largest and oldest survivors group for abuse victims.

BishopAccountability.Org, which documents the Catholic clergy sex abuse crisis, said Apuron and four other bishops must be defrocked, just like the disgraced former Archbishop of Washington, D.C., cardinal Theodore McCarrick.

The pope’s much publicized summit staring Thursday brings together the heads of bishops’ conferences around the world to discuss the clergy sex abuse crisis.

Barrett Doyle said that because of Apuron’s appeals process, he technically remains the archbishop for the Archdiocese of Agana.

“There is a preponderance of evidence that he has inflicted incalculable harm,” Barrett Doyle said about Apuron during the news briefing.

Concerned Catholics of Guam, ahead of the summit, addressed a petition to Pope Francis, asking him to sustain the guilty verdict on Apuron so that this chapter in the Guam Catholic Church will come to a complete closure and help the healing process.

The pope placed Apuron on administrative leave in 2016, when former altar boys publicly accused Apuron of sexually abusing or raping them as minors in the 1970s. Apuron’s own nephew came out in 2018, saying his uncle raped him when he was already an archbishop, in the 1990s. 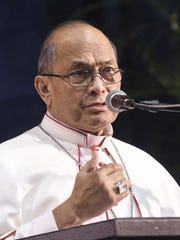 In February 2017, a Vatican tribunal led by Cardinal Raymond Burke went to Guam to investigate allegations against Apuron.

About a year later, in March 2018, the Vatican tribunal announced that it found Apuron guilty of “certain accusations” of crimes related to the sexual abuse of minors. Apuron denied the allegations, in statements to the media.

“If he chooses not to take this simple step today, we cannot have any faith that he will do the right thing when it comes to cases of clergy sex abuse and cover-up at his summit this week,” Hiner said ahead of the summit.

Besides a guilty verdict in the Vatican canonical case, Apuron also is facing six lawsuits in civil court. Guam has more than 200 clergy sex abuse cases filed in local and federal courts since 2016, when the island lifted the statue of limitations for child sexual abuses.

The Archdiocese of Agana also filed a Chapter 11 reorganization bankruptcy to help compensate the victims of clergy sex abuse.

March 22: ‘They believed us’: Victims of Guam clergy abuse react to Vatican verdict