Flies appeared just as attracted to naked horses and they were to zebras or horses wearing costumes, but the insects rarely landed on stripes.

New research shows why you might want to dress like a zebra if you’re around biting flies. Buzz60’s Sean Dowling has more.
Buzz60

And, aside from feeling more fashionable, the horses attracted less flies, according to researchers from the University of Bristol in the U.K. and University of California Davis.

In a study published Wednesday in the peer-reviewed journal PLOS ONE, researchers at a farm in Great Britain detail how flies land on captive zebras and horses dressed in black, white and also black-and-white stripes. Three zebras and nine horses were observed for a total of about 16 hours.

Flies appeared just as attracted to naked horses as they were to zebras or horses wearing costumes, but Tim Caro of the University of California notes that flies hardly ever landed on stripes. So, horses wearing black-and-white striped coats appeared to have a sort of insect repellent compared to the animals wearing a solid color. 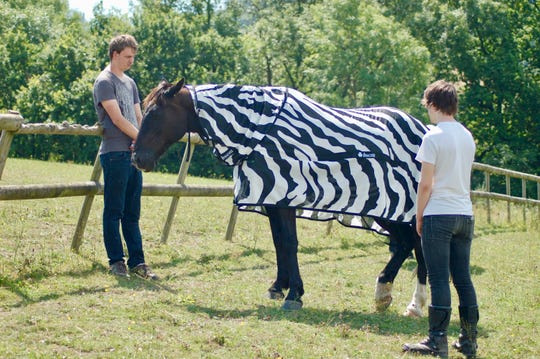 “Stripes may dazzle flies in some way once they are close enough to see them with their low-resolution eyes,” Royal Society University Research Fellow Martin How said in a statement.

Researchers note this effect was only observed in European flies and flies might not behave the same in Africa.