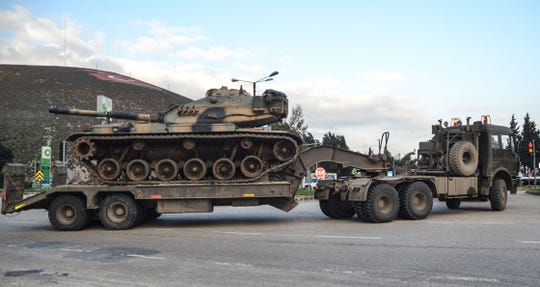 The White House said in a short statement late Thursday that it will keep a “small peacekeeping group” of about 200 military personnel in Syria.

The announcement made by White House press secretary Sarah Sanders comes after President Donald Trump’s administration was widely criticized for deciding to withdraw the 2,000 U.S. troops from Syria and claiming the Islamic State group was “defeated.”

Sanders did not say where these peacekeepers would be based or what they would specifically be doing. She said they would remain in Syria for a “period of time.”

More: US commander: ‘Not consulted’ on Syria withdrawal

The development followed a phone conversation Thursday between Trump and Turkey’s President Recep Tayyip Erdogan. The White House said the two leaders agreed to coordinate on the creation of a potential “safe zone” in Syria, without elaborating.

Trump’s decision to withdraw U.S. troops reversed longstanding U.S. policy in Syria and prompted the resignation of Defense Secretary Jim Mattis. Critics said the U.S. was leaving Syria before it had completely eradicated the Islamic State presence there.

“Is it a good thing to immediately remove American troops from Syria, or will it not strengthen Russia and Iran’s hand?” German Chancellor Angela Merkel said at an address at a security conference in Munich last week. She criticized the U.S. plan.

Trump has previously predicted that all of the Islamic State’s territory in Syria would be recaptured by the second week of February and the group’s physical strongholds are on the verge of collapse. But many experts and military officials believe its still poses a major threat.

According to a recent report by the Center for Strategic and International Studies, the militant group is far from obliterated. The Washington-based think tank estimates 20,000 to 30,000 Islamic State militants may still be in Syria and Iraq.

The Senate passed legislation earlier this month that breaks with Trump’s Syria policy. The legislation, now being considered by the House of Representatives, includes a  warning against a “precipitous” withdrawal of troops from Syria and Afghanistan.

It also wants the Trump administration to certify certain conditions have been met “for the enduring defeat of al Qaeda and ISIS before initiating any significant withdrawal of United States forces from Syria or Afghanistan.”

Foreign ministers and senior officials from the 79-member, U.S.-led anti-Islamic State coalition are meeting in Washington to develop a way ahead after President Donald Trump’s abrupt decision to withdraw American forces from Syria. (Feb. 6)
AP

From fishing village to gastronomic heaven: tables turn for Wolfgat