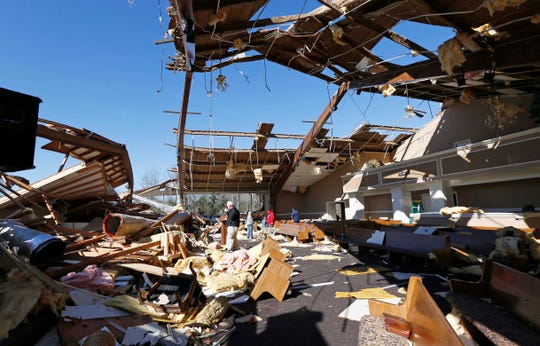 Broken lumber, loose paneling, insulation and destroyed pews are all that remain of the First Pentecostal Church in Columbus, Miss., on Feb. 24, 2019, after being hit by a tornado. (Photo11: Rogelio V. Solis, AP)

Stunned residents of a small Mississippi city were picking up the pieces Sunday after a violent tornado ripped through town, leaving one person dead – and marking the first tornado death of 2019.

The tornado in Columbus, which was triggered by a line of intense thunderstorms on Saturday evening, was confirmed by the National Weather Service in Jackson.  The twister, part of a severe weather outbreak that battered the South, toppled trees and shattered businesses and homes in the city of 24,000 on the eastern border of the state.

Ashley Glynell Pounds, 41, of Tupelo died after a building collapsed on her and three other people, the office of Columbus Mayor Robert Smith confirmed in a Facebook post. Smith said 12 other people were injured.

Pounds’ death was the first tornado death of 2019, according to The Weather Channel.

Your @MSEMA team has been working with local first responders during these storms. So far one fatality has been confirmed and damage assessments are now underway. We are saddened by the loss of life but thankful it was not much worse. We are grateful this Sunday morning. https://t.co/9xIBRqplB4

Mississippi Gov. Phil Bryant said Sunday in a tweet that state emergency officials were working with first responders. “So far one fatality has been confirmed and damage assessments are now underway. We are saddened by the loss of life but thankful it was not much worse. We are grateful this Sunday morning,” he said.

Pastor Steve Blaylock of First Pentecostal Church of Columbus hugged his wife, Pat, on Sunday amid the broken lumber, destroyed pews and sheared-off roof that was once his church.

The building was “a total loss,” Blaylock said. But he said the church would still hold a Sunday prayer service and a scheduled baptism, using a borrowed portable baptismal pool.

“We will rebuild. We’ve got a good church here,” Blaylock said. “It will be a testimony of God.”

“The wind all of a sudden just got so strong and it was raining so much you could hardly see out the door, and I could hear a roaring. Evidently it came close,” Lee Lawrence told the Associated Press. Lawrence said four buildings on his used car lot were destroyed, car windows were blown out and uprooted trees were flung across vehicles.

Video as the tornado passed through Columbus, MS. We got caught in the storm after eating and were forced to seek shelter in a gas station. #MSWXpic.twitter.com/Z97tARQ5Z4

Dax Clark, a meteorology student at Mississippi State University, told The Weather Channel he and some classmates took refuge at a gas station.

“We knew from the radar on our phones that the tornado was moving north of us, but the wind was still crazy,” Clark said. “It did not hit our gas station directly but it was still pretty substantial.”

More: 2018 was an all-time record quiet year for tornadoes in the U.S.

Clark witnessed a trail of destruction after the storm roared through. “We saw homes without roofs and outer walls, a car flipped over into a ditch, and lots of trees and power lines down,” he said.

Elsewhere, a man died after his vehicle became submerged in high water fueled by heavy rains in Knoxville, Tennessee. Officials in some eastern Kentucky counties also declared emergencies because of  flooding and mudslides. 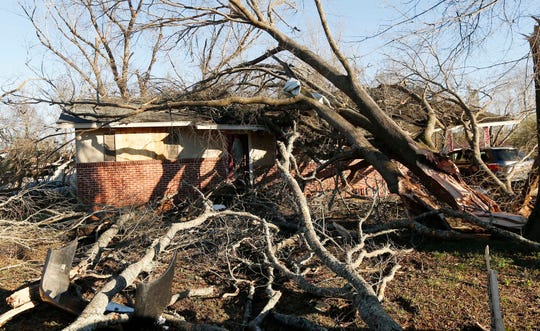