What I’m Hearing: The Phillies will sign Bryce Harper to a massive contract but USA TODAY Sports’ Bob Nightengale explains that two other teams nearly had him locked up.
USA TODAY

CLEARWATER, Fla. — Fans lined up outside the parking lot early Saturday morning, eagerly awaiting his arrival. The huge scoreboard inside Spectrum Field kept flashing images of his face. The two empty lockers inside the clubhouse, sandwiched between Odubel Herrera and Drew Butera, had his equipment.

And finally, after 179 days since declaring for free agency, Bryce Harper walked through the doors of the Philadelphia Phillies’ spring-training clubhouse, through the stands, atop of the first-base dugout, and was officially introduced, becoming the instant face of the franchise.

The press conference, with Harper’s jersey, No. 3, hanging in the backdrop, with posters from his Sports Illustrated cover when he was a 16-year-old to his new Playstation video game cover, was like a scene out of Vegas. It was the first Phillies’ press conference in franchise history on top of a dugout.

It was glorious and spectacular, with the Phillies owner John Middleton calling themselves the favorites to win the National League East to agent Scott Boras dropping a few memorable quotes. 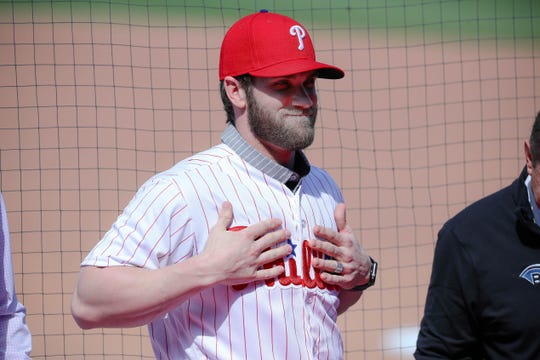 “The maestro wanted to build a championship,’’ Boras said, “and he wanted his harp. The Philadelphia-Phil-Harp-monic symphony is built.’’

Harper tried to dampen expectations, saying that even though he is being paid $330 million over the next 13 years, it doesn’t mean the Phillies are going to turn into the ’27 Yankees.

Still, by the end of his press conference, he couldn’t help himself, and got so caught up in emotions, he said he wanted to bring a championship to D.C.

“I want to be on Broad Street, freakin’ on a boat, a bus, or whatever it is,’’ Harper said, “that’s what it is all about. I want to bring a trophy back to the Philadelphia Phillies organization and to the whole city of Philly.

“I want my legacy to be all about winning, all about playing the game the right way, for a great organization, and for a long period of time.’’

Yet, Harper says he insisted there would be no opt-out clause, a full no-trade provision, guaranteeing he would stay in Philly until he’s a middle-aged man.

“For me, I wanted to be somewhere where I could be for a long time, and not worry about going somewhere else. I’m putting all of my faith and trust in this organization, and I’m very excited about it.’’

Harper, knowing this is the first team to add three All-Star position players in one winter, joining catcher J.T. Realmuto and shortstop Jean Segura, wants to be remembered not for MVP seasons, but World Series trophies.

“You’re always remembered for winning,’’ Harper said, “and what better place to do it than Philly. Fans are blue-collar people and thrive on winning. I’m from a blue-collar family.

“You play in Philly as a visitor, you see the Eagles, the Flyers, the 76ers, all of those big-time memories, it’s an amazing thing to see.

SHOW HIM THE MONEY: Harper agrees to record deal

Harper may be just 26, but he’s a baseball historian. He can rattle off the exploits of Mike Schmidt, Steve Carlton and Chase Utley, and showed his respect for the late Hall of Fame pitcher Roy Halladay, declining to ask for his number, 34. He wouldn’t even take the number of his idol, No. 7, Mickey Mantle, since it already belonged to teammate Maikel Franco.

“I thought Roy Halladay should be the last one to wear it,’’ Harper said. “He’s somebody in this game that, you know, is greater than a lot of guys who have ever played it. A Hall of Famer. Somebody who played the game the right way. Was a great person and was one of the nicest people I’ve ever met.

“So, for me, it’s Roy Halladay. He’s No. 34 and he’s what represents that number in Philly. And when you go in there and see his name on that flagpole in center field. It’s something that he should be remembered for.”

And his reason for not taking No. 7?

“He’s a teammate of mine, I didn’t want to ask for the number,” Harper said. “I didn’t feel right doing that. I don’t know if that has any significance to him being No. 7, but I didn’t want to find out. He’s No. 7 on the Phillies and he should be able to wear that number every single day.’’

So he settled for No. 3, and, no, not because it was Babe Ruth’s old number.

It will look even better, of course, if the Phillies win. Harper realizes this will not be a 13-year honeymoon. Philly fans can be, well, how do we put this, rather impatient. The last Phillies’ player never to be booed in his career may have been All-Star second baseman Chase Utley.

So, how long before Harper hears some boos from their demanding fans?

“Is he going to hit with the bases loaded on opening day?’’ said Phillies special assistant Larry Bowa, 73, who has spent 29 years in the organizations as a player, coach, manager and executive. “Hey, he’s going to go through the gamut.

“I’m not going to sugarcoat it, when you go bad, he’s the guy. But, until you’ve been through it …”

But, hey, at least he belongs to Philadelphia. He is one of their own now.

“He’s been in the spotlight since he’s been in high school,’’ Bowa said. “I think he’ll be able to handle it.”

The Phillies, who haven’t had a winning season since 2011, certainly has a fan base believing they’re about to see something special. The Phillies sold 100,000 tickets the first day Harper signed on Thursday afternoon, 80,000 tickets the next day and 40,000 on Saturday. By the time opening day comes around, his $20 million signing bonus might have paid for itself.

“I didn’t care about any of that,’’ Middleton said. “I just want to win. We win, we will pack the place. And with Bryce, we are going to win.’’

Louisiana boy in hospice care for cancer made honorary soldier