Four children, including a 6-year-old boy ripped from his father’s arms, were among the 23 victims of Sunday’s deadly tornado that tore through Western Alabama, according to Lee County officials.

The names and ages of victims were released at a news conference Tuesday held by the Federal Emergency Management Agency and local law enforcement officials.

The EF-4 tornado with winds of 170 mph cut through a nearly one-mile-wide path that stretched over at least 24 miles through the small town of Beauregard, Alabama, near the border with Georgia. Officials now believe the overall track of tornadoes Sunday extended 70 miles across the two states.

“She just said her child was swept from the father’s arms,” Prather said. “A mother’s love for her child. How do you tell a mom that she can’t go look for her child? She went and tried to find her child, like everybody else.”

This is a GoFund Me page for fourth-grader Taylor Thornton who was killed in Sunday’s tornado in Lee County, Alabama.  (Photo: gofundme.com)

Fourth-grade student Taylor Thornton’s death was reported on the Facebook page of Lee-Scott Academy in Auburn, Alabama, a Christian school that she attended.

The school said Taylor “was welcomed into the arms of Jesus as the result of the severe weather event in Lee County yesterday.”

The school held a community-wide prayer Tuesday, and loved ones have created a GoFundMe Page to help cover funeral costs. More than $32,000 has already been raised, surpassing the $15,000 goal.

“I guess they maybe didn’t hear the sirens, or if they did it was too late for them to get anywhere safe,” said Desteni Clifton, Creech’s granddaughter.

“We were very, very shocked to hear the whole thing happened,” Clifton said.

Creech, a resident of Panama City, Florida, had survived Hurricane Michael this fall, although the roof of her apartment was ripped off. Creech found refuge in Beauregard, where she rekindled her relationship with Grimes. The two had married young and produced two children , but the relationship later fell apart.

Also injured in the tornado was Grimes’ 11-year-old daughter, whose legs were broken. Thornton, who died, was part of the camping group as well. 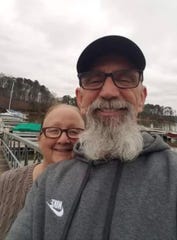 Sheila Creech and Marshall Lynn Grimes, both 59, were among the 23 killed in Sunday’s tornado in Alabama. (Photo: Desteni Clifton)

Vicki Braswell, 69, was killed when the wall of a mobile home collapsed on her as she and her family sheltered in their mobile home in  one of the hardest-hit areas.

Braswell, her daughter and granddaughter took shelter beneath a mattress in their double-wide trailer  while other family members huddled nearby.

“We heard it coming but by the time we knew what it was, it hit us. That’s when all hell broke loose,” said Steve Whatley, Braswell’s son-in-law. “It picked us up and dumped us back down 50 feet away.” 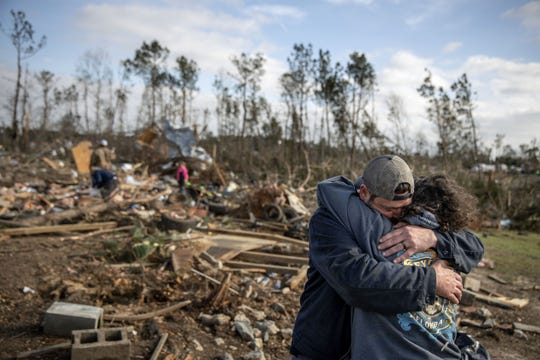 Carol Dean, right, is embraced by David Theo Dean as they sift through the debris of the home Carol shared with her husband and David’s father, David Wayne Dean, who died when a tornado destroyed the house in Beauregard, Ala., Monday, March 4, 2019. (Photo: David Goldman, AP)

Each were killed when the tornado struck the home they sheltered in.