Alliance of American Football co-founder and head of football Bill Polian said Wednesday there have been informal discussions about the possibility of NFL teams loaning younger players to AAF teams in the future.

“The talk is ramping up – I’ll say that,” Polian said.

Polian there have been no formal talks, “but lots of NFL people have bandied about that thought with lots of us.”

The idea would be for NFL teams to assign their No. 3 quarterback and other players from the bottom half of their roster and developmental squads to gain more playing time under quality coaches. The AAF has several proven name coaches, including Steve Spurrier, Mike Singletary, Rick Neuheisel and Mike Martz.

This would be similar to young major league baseball players going down to a Class AAA affiliate to gain a few more at-bats. 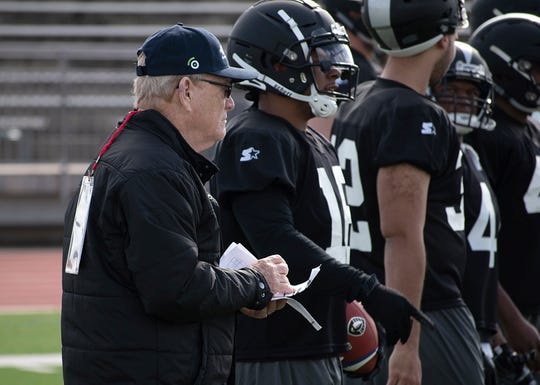 Bill Polian, left, didn’t speculate whether an arrangement with the NFL could be in place by the second season of the Alliance of American Football. (Photo: AP)

“As a broadcaster for almost 20 years, and talking to (NFL) coaches, one of the things they have been frustrated with on this latest CBA is the reduction of meeting time and practice time,” San Antonio Commanders general manager Daryl Johnston said. “They just don’t think the guys are getting enough repetition.”

The AAF has launched to good reviews this season, producing favorable television ratings with an entertaining level of football.

Polian didn’t speculate whether an arrangement with the NFL could happen by the AAF’s second season.

“Those discussions will continue but whether they bear fruit remains to be seen,” Polian said. “There are lots of procedural hurdles that have to be crossed before you could make that happen.”

This kind of arrangement would fit well into the AAF’s game plan for the league.

“When we started this journey,” Johnson said. “The one big thing we wanted to do was to be complementary to the NFL with the hope that someday we could be a developmental component to what they are doing.”

Someone is going to die when fans rush court or field

Who is Cognizant, the tech services company behind Facebook's latest scandal?