U.S. health officials have approved a medication related to the mind-altering drug ketamine as a new option for patients with severe depression. (March 6)
AP

A new medication related to the iconic party drug “Special K” that can treat depression almost instantly could revolutionize treatment of the condition affecting more than 16 million Americans, experts say.

A subsidiary of Johnson & Johnson has won fast-track approval from the Food and Drug Administration for use of the drug esketamine in conjunction with an oral antidepressant for adults who have tried at least two other treatment options without success.

Esketamine, administered as a nasal spray, is a cousin of the anesthetic ketamine, which was once a popular recreational drug. Studies have shown ketamine’s effectiveness against depression, and ketamine clinics already operate across the nation.

“This is an enormous deal in terms of access to care,” Levine said. “And the degree of advancement can’t be overstated. This is truly the best new option in over 60 years. And more will be coming down the pike.”

Levine said he has treated more than 3,000 patients with ketamine at his Actify Neurotherapies clinics. But he said he expects to stock esketamine within months “happily coexisting” with the older drug. 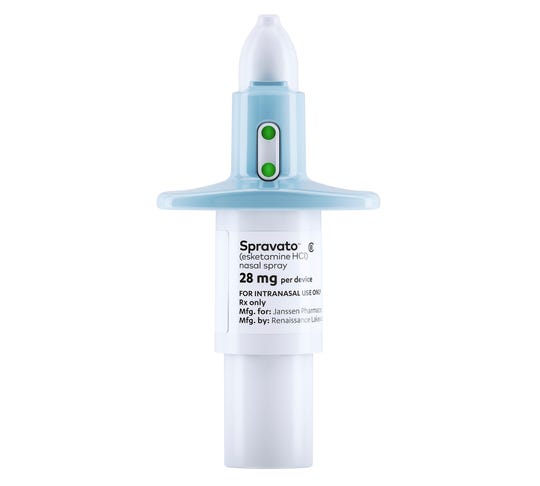 The FDA said the drug’s distribution will be tightly controlled due to the potential for abuse and the “risk of serious adverse outcomes resulting from sedation and dissociation” caused by the drug.

“There has been a long-standing need for additional effective treatments for treatment-resistant depression, a serious and life-threatening condition,” said Tiffany Farchione, acting director of the Division of Psychiatry Products in the FDA’s Center for Drug Evaluation and Research.

Farchione said the agency reviewed controlled clinical trials of the drug before approving it. The spray may not be taken home; the patient self-administers Spravato nasal spray in a doctor’s office or clinic. Patients must be monitored by a health care provider for at least two hours after receiving their Spravato dose.

In a four-week clinical trial, the Spravato nasal spray demonstrated a “statistically significant effect” compared to a placebo, the FDA said, and some effect was seen within two days.

A longer-term trial showed treatment with Spravato plus an oral antidepressant provided “significantly longer time to relapse of depressive symptoms” than patients on a placebo.

The FDA approved ketamine as a general anesthetic in 1970. “Special K” emerged on the party scene years later, and ketamine became a controlled substance in 1999.

“Esketamine isn’t really much different for our purposes,” Levine said. “But the impact will be tremendous.”