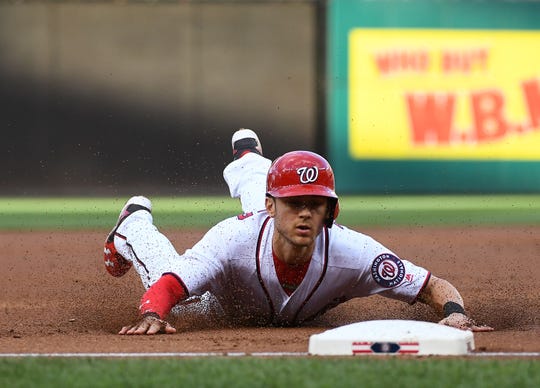 Nationals shortstop Trea Turner has stolen at least 40 bases in each of the past two seasons. He could get the green light even more often in 2019. (Photo: Brad Mills, USA TODAY Sports)

PHOENIX – It doesn’t take an advanced degree in economics to understand the importance of supply and demand in the League of Alternative Baseball Reality.

One day after a run on elite starting pitchers in the American League, speed was the hot commodity for owners in the National League draft.

With a scarcity of stolen bases throughout the league, Trea Turner of the Washington Nationals was the NL auction’s most expensive player, going to Derek VanRiper of Rotowire for a tidy $42.

Manager Dave Martinez recently said he wanted to see his shortstop have “75 to 80” stolen base attempts this season – which may have helped push Turner ahead of Nationals ace Max Scherzer, who was the only other NL player to reach the $40 mark.

With Turner off the board, the losing bidders had to stretch their budgets even further to get those precious steals. Defending champion Howard Bender of Fantasy Alarm snagged both Starling Marte ($35) and Jean Segura ($28), while Lorenzo Cain ($28) and Ender Inciarte ($24) were also popular speed targets.

Even rookie outfielder Victor Robles of the Nationals – with 34 games of major league experience – spurred a bidding war that eventually reached $27.

Speaking of bidding wars, the most intense one of the night came around the midpoint of the draft, after the consensus top three first basemen – Paul Goldschmidt ($32), Freddie Freeman ($32) and Anthony Rizzo ($31) – were already rostered.

Both Lenny Melnick and the duo of Greg Ambrosius and Shawn Childs had their eyes on Cody Bellinger of the Los Angeles Dodgers as his price zoomed past the presumed stalwarts at the position before Melnick finally bowed out at $36.

It was yet another example of stars-and-scrubs strategy that’s become the trademark of Ambrosius/Childs teams. They also grabbed sluggers Nolan Arenado and Bryce Harper, as well as starting pitcher Walker Buehler and top closer Edwin Diaz.

One thing that stands out about the player pool in NL-only drafts this season is the amazing depth at shortstop. Turner, Manny Machado, Trevor Story and Javier Baez all sold for more than $30. Four others went for at least $20.

On the pitching side, a deep collection of excellent starters made for some spirited bidding on the top arms early in the auction.

At $39, Cy Young winner Jacob deGrom’s price was just a dollar less than Scherzer’s. Aaron Nola was the only other pitcher over $30, but Buehler ($27) led a healthy contingent of eight more starters for at least $20.

However, the auction took an odd twist as team owners started realizing how much pitching depth the NL has. Those who waited until late to round out their pitching staffs reaped some major bargains.

There was also plenty of depth among the relievers, with Diaz ($24) and Kenley Jansen ($20) leading a group of 12 closers selling for $10 or more.

Finally, the NL doesn’t have the high-end prospects comparable to the AL’s Vladimir Guerrero and Eloy Jimenez, but it does make up for it with depth. In addition to Robles, seven other top prospects were taken in the auction phase of the draft.

After a grueling #LABR NL auction, here are the players left over and taken in the reserve round. pic.twitter.com/ruDg1zYbm5