Katelyn McClure, 28, and Johnny Bobbitt Jr., 36, admitted their roles in the scheme at separate hearings in federal court, Camden.

Authorities said Bobbitt posed as a good Samaritan in a scam that authorities say was engineered by McClure and her boyfriend, Mark D’Amico of Florence.

The couple claimed that Bobbitt, who is homeless, used his last $20 to buy gas for McClure after her car sputtered to a stop late at night on a Philadelphia highway in November 2017. 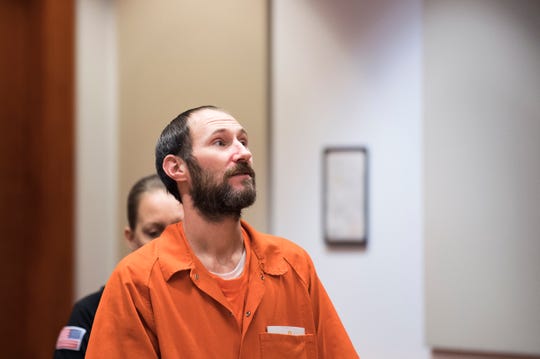 Johnny Bobbitt Jr.appears in court for a detention hearing Friday, Dec. 14, 2018 at Burlington County Superior Court in Mount Holly, N.J. Bobbitt will be released on level 3 monitoring and the next court date is scheduled for Feb. 6, 2019. (Photo: Joe Lamberti/Courier Post)

Authorities say the trio actually met near a Philadelphia casino frequented by D’Amico and McClure. They concocted the story and then asked people to provide funds on Bobbitt’s behalf.

A GoFundMe appeal, created by McClure, “stated that funds were being solicited to get Bobbitt off the streets and provide him with living expenses, setting a goal of $10,000,” according to the U.S. Attorney’s Office for New Jersey.

D’Amico and McClure transferred donations into accounts they controlled, providing about $25,000 to Bobbitt, the federal prosecutor’s office said.

It alleged the couple spent most of the money over a three-month period, “including significant amounts on D’Amico’s gambling, vacations, a BMW automobile, clothing, expensive handbags and other personal items and expenses.”

McClure pleaded guilty to a conspiring to commit wire fraud, the U.S. Attorney’s Office for New Jersey said in a statement.

Court records detailing the charges against McClure and Bobbitt do not mention D’Amico, but refer to a third conspirator in the scheme.

D’Amico is not charged with any federal crimes, according to the federal prosecutor’s office.

All three suspects also face state charges of theft by deception and conspiracy to commit theft.

Wednesday’s developments in federal court “do not affect our case against Bobbitt, McClure or D’Amico, all of whom remain answerable to the state charges,” said Joel Bewley, a spokesman for the Burlington County Prosecutor’s Office.

U.S. District Judge Jerome Simandle set a June 19 sentencing date for McClure, who faces a potential maximum penalty of 20 years in prison and a $250,000 fine.

Simandle set no sentencing date for Bobbitt, who faces a maximum potential penalty of 10 years in prison and a $250,000 fine.

“There was no criminal complaint filed and no indictment. The case was never presented to a (federal) grand jury,” said Matthew Reilly, a spokesman for the federal prosecutor’s office.

Who is Cognizant, the tech services company behind Facebook's latest scandal?