FORT COLLINS, Colo. – Christopher Watts has admitted killing his daughters last year at the oil site where he dumped their bodies after strangling his wife, Shanann, in their Colorado home.

In an interview with investigators last month that was released Thursday, Watts said he and Shanann had a fight in the hours after she returned from a business trip Aug. 13.

“I just felt guilty … more guilty than ever before,” Watts told investigators, according to documents released Thursday. 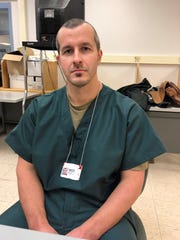 Watts immediately put both hands around his wife’s neck and strangled her.

“Every time I think about it, I’m just like, did I know I was going to do that before I got on top of her?” he told investigators.

“Everything that happened that morning I just don’t — I don’t know, … like, I try to go back in my head … I didn’t want to do this, but I did it … it just felt like there was already something in my mind that was implanted that I was gonna do it and when I woke up that morning, it was gonna happen and I had no control over it.”

Watts recalled Weld County District Attorney Michael Rourke saying at the sentencing hearing that it takes two to four minutes to strangle someone to death, so “Why couldn’t I just let go?”

Watts said he didn’t know why Shanann didn’t fight back and believes she may have been praying.

After he killed Shanann, Watts said he was shaking and felt as if he wasn’t in control of his emotions.

The noise from their fight woke up their daughter Bella, 4, Watts said.

Nov. 19: ‘Most inhumane and vicious crime’: No parole — ever — for dad who killed pregnant wife, 2 kids

She asked her father what was wrong with her mother, and Watts said he replied, “Mommy doesn’t feel good.”

He wrapped Shanann in a sheet and tried to carry her downstairs, but he lost his grip and had to drag her while Bella watched him.

“What’s wrong with Mommy?” he recalled Bella asking again as she began to cry.

He said Bella was smart and knew what was going on. Bella watched as he backed his truck into the garage and put Shanann’s body in the back seat on the floorboards.

The noises from dragging his wife’s body down the stairs woke their 3-year-old daughter, Celeste, who was starting to get out of bed when Watts came back inside.

Watts said he felt as if someone else was in control of him as he put Bella and Celeste in the back of his truck on the bench seat.

Bella again asked whether her mother was OK, and Watts told his daughters their mother would be fine.

Aug. 23: Chris and Shanann Watts’ friends in Colorado saw a ‘perfect’ family. What led to 3 deaths?

Watts said that when they arrived at the oil site 45 minutes from their Frederick, Colorado, home, he pulled Shanann’s body out of the car with his daughters sitting on the back seat. They asked him what he was doing to their mother, and he said he doesn’t recall what he told them.

Watts said he returned to the truck and “Cece was first.”

He put his daughter’s Yankees blanket over her head and strangled her in the back seat with Bella sitting beside her, Watts told investigators. Bella didn’t say anything while watching her father kill her sister.

He carried Celeste from the truck to the oil tank and dropped her inside, then returned to his truck where Bella remained in the back seat.

“What happened to Cece?” Watts said Bella asked him. “Is the same thing gonna happen to me as Cece?”

He said he is not sure how he replied.

He “did the same thing” to Bella, and placed the Yankees blanket over her head, Watts told investigators.

“Daddy, no!” were Bella’s last words, Watts said, and he hears them every time he closes his eyes.

Watts said Bella’s head was twisting under the blanket while he smothered and strangled her, and when he heard the prosecutor say Bella bit her tongue repeatedly, “he wanted to bang his head up against the wall,” according to investigators.

He took Bella’s body to another oil tank and dropped her inside. Watts said he doesn’t know why he dumped his daughters in separate tanks.

Watts said he killed his daughters out of anger with Shanann “that he took out on everyone in front of him that morning,” according to investigators.

“Right now I’d have a 5-year-old … a 3-year-old … and more than likely, a one-month-old son … and a beautiful wife … and right now it’s just me,” Watts told investigators.

In November, Watts was sentenced to three consecutive life terms in prison and 84 additional years for the murders of his pregnant wife and two daughters.

Aug. 18: Colorado mom’s body was in shallow grave near where daughters were found, court records say

Aug. 17: Court documents: Colorado children found in oil well, may have been strangled

Top seeds in danger of upset