SportsPulse: Golf needs a shake up and to attract younger people to the sport. USA TODAY’s Christine Brennan believes a shot clock could do exactly that.
USA TODAY

ORLANDO – The E-Ride shut down.

A day after giving fans a thrilling ride around Bay Hill in the land of theme parks, Phil Mickelson never got untracked and tumbled down the leaderboard in Friday’s second round of the Arnold Palmer Invitational.

Unlike in the first round when he shot 4-under-par 68, there were no right-handed shots, no high stepping an out-of-bounds fence, no near hole-outs for eagle. Instead, Mickelson made just one birdie, hit one ball out of bounds and another into a water hazard en route to a 78.

Instead of making a charge at the leaders, Mickelson finished 11 shots behind co-leaders Tommy Fleetwood and Keegan Bradley and missed the cut. 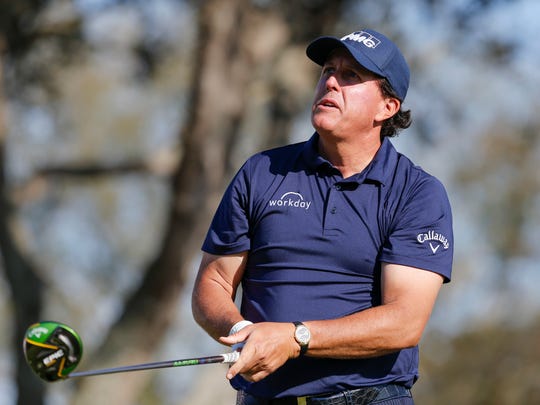 READ MORE: Get the latest golf news and analysis at Golfweek

“The fairways are tight, the rough is thicker, and I start to steer it and I start to make horrific swings. I haven’t hit some of the shots I hit today in a long time.”

Mickelson again had troubles on the par-5s. Three weeks ago in the WGC-Mexico Championship, he didn’t make a single birdie on any of the three par-5s during the tournament. It was just the third tournament of his career where he failed to make at least one birdie on a par-5 over four rounds.

He also dumped his second shot into the water guarding the par-4 eighth and made double-bogey 6. His lone birdie came from three feet on the par-4 fifth.

“It’s a hard course and it’s a very hard course to get the ball close to the hole,” Mickelson said. “Whenever I tried to make birdie I ended up making bogey. So you have to play every hole for par, which is a little bit boring for me.”

Mickelson, who won his record-tying fifth AT&T Pebble Beach Pro-Am earlier this year, immediately headed to the range to hit balls after talking with the media following his round.

Lefty didn’t know if he’d make the cut and was still undecided if he’ll play The Players Championship next week. Mickelson said he’ll play a practice round Tuesday at TPC Sawgrass, home to the PGA Tour’s flagship event which he won in 2007, and go from there.

“I’ll play nine and take a look and, I mean, I want to play it, so I would most likely,” Mickelson said. “But if I hit it like this, it’s pointless, so I’ve got to figure something out.”