SportsPulse: Our draft guru Michael Middlehurst-Schwartz tells you the five guys you need to know ahead of April’s draft that shined at the combine and could become instant stars in the NFL.
USA TODAY

Sure, football’s culture is changing when it comes to concussions.

It typically takes longer than it used to in getting cleared to return to play. The helmets are getting better. More rules are instituted for safety. Self-reporting of symptoms is seemingly on the rise.

“It doesn’t impact me at all,” Notre Dame tight end Alize Mack declared during the NFL Scouting Combine last weekend in Indianapolis, asked if increasing awareness about long-term risks associated with head injuries affect his view of the football career he’s pursuing.

“I think I speak for everyone in this room when I say this is a game most of us have been playing since we were seven years old,” added Mack, who suffered two concussions in college. “So, at the end of the day, that’s not going to change how I attack a defense or choose to go after a player. This is football. It’s a physical game. That’s what you sign up for.” 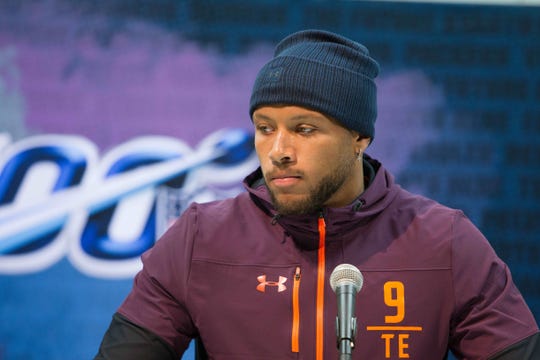 Have no fear. Never mind that, with horror stories involving chronic traumatic encephalopathy (CTE) found in deceased ex-players, institutional changes related to protocols and the billion-dollar settlement of a class-action lawsuit by former players that took effect in 2017 – after years of denial by the NFL that there was a link between football and long-term brain issues — you might think there should be a warning label when signing up to play football.

Yet as we’ve come to the point where players in the latest crop of prospects for the NFL Draft have grown up in an age of enlightenment, playing under concussion protocols since they first took up the sport, it isn’t hard to find bravado from players dismissing serious concerns about long-term health.

“No, not that all,” said receiver Miles Boykin, one of Mack’s college teammates. “This is the wrong game to play if you’re afraid.”

I’m not suggesting players shouldn’t pursue football as a dream career. While it’s tough to quantify, anecdotally there could be many who played the sport without any long-term issues from head trauma. And concussions occur in a lot of different sports and activities – not just football.

Still, as roughly 300 players assembled in Indianapolis for the annual event that evaluates and essentially processes a new crop for entry into the NFL, I was curious to seek a sense of how concussion awareness resonates with a new generation.

Like those from previous generations, the handful of players queried by USA TODAY during the combine – all of whom suffered concussions in college — downplayed risks as an occupational hazard that comes with the potential for multi-million-dollar salaries.

“That’s the game,” Mack said. “A head injury can happen at any moment, not just (from) football. You know that’s a risk. An ankle injury, a head injury, all types of things are risks. But at the end of the day, this is football.”

Boykin, MVP of the Citrus Bowl, has a deeper perspective than most. His older brother, George, was forced to quit playing football after he suffered a brain contusion while playing the sport during his sophomore year in high school.

“That’s a real thing,” said Boykin. “He understood the risk he took when he was playing. It’s awful when it happens, but you understand.”

Boykin said his brother, 24, has thrived without football. George Boykin is a commercial pilot and currently pursuing a master’s degree. Rather than view his brother’s experience as a deterrent, Miles – who suffered one concussion playing football and another playing basketball – said it helped him gain a better appreciation that he is healthy enough to play.

“It’s tough,” he said. “We put ourselves in harm’s way. I understand that. We sign up to play this sport. But without this sport, I wouldn’t be standing in front of you. I wouldn’t have gone to Notre Dame without that sport. So, I’m extremely thankful for it.”

Allen Sills, the NFL’s chief medical officer, is encouraged that data tracing concussions is trending in a positive direction. The 214 concussions league-wide during in 2018 – including regular-season and preseason games, plus practices during the offseason, training camp and through the season – were the lowest since 2014.

While Sills acknowledges year-to-year data is more relevant as part of longer-term patterns, he believes the NFL’s proactive safety efforts, in conjunction with the NFL Players Association (NFLPA), are paying dividends. Last year, the league instituted a rule similar to college football’s “targeting” measure that bans players from lowering their head in striking a blow. The NFL has also outlawed outdated helmets in recent years as technology has improved. Last offseason, the NFL had intervention sessions with seven teams – meeting with general managers, coaches and others – that included emphasis on practice patterns that may affect concussion rates. This follows the sea change that occurred after the last labor deal was struck in 2011 that significantly curbed contact in practices.

“This is a holistic league-wide effort,” Sills said during the combine. “Everybody is part of the solution with this issue.”

Sills touts the work of engineers who have driven data that reflects various patterns, and he is bullish on educational efforts, bolstered by the NFLPA, that have fueled a cultural shift that he maintains has resulted in more players self-reporting symptoms.

“Most of our players have grown up with the concussion protocol, like their entire football career, and in college they’ve been a part of a concussion protocol,” Sills said. “So, I think they understand why we do it and are very accepting of it for how we do business.”

Consider the case of Jalen Hurd, a Baylor wide receiver who transferred from Tennessee following a bizarre incident in 2016 that raised questions about his former school’s handling of concussion protocol. Hurd, then a running back, was sidelined during a game against Georgia with a concussion – yet grabbed his helmet and ran on the field anyway to participate in a desperation kickoff return in the final seconds.

After that, Hurd remained isolated in his room for the better part of a week while dealing with concussion symptoms. He missed the following week’s game. Before he bolted from the team in midseason, he experienced further concussive symptoms.

“It definitely impacted me my last year at Tennessee with my concussion,” Hurd reflected during the combine. “You’ve got to be aware. I think at some points in my career, I wasn’t aware of what it could do. Luckily, it hasn’t done anything.”

Hurd said he’s learned lessons from the two concussions he suffered at Tennessee.

“All you can do with concussions is rest,” he said.

Another lesson: “Just being aware of your body,” he said, “making sure to know when you have a concussion, when to play … when not to play.”

Sometimes, the culture changes from within.

Cup holders and memory foam seats: How Alaska Airlines is revamping its cabins