Serena Williams, who played as well as she has in recent years in Indian Wells on Friday night, is out of the BNP Paribas Open, having to retire with a medical issue during her third-round match against Garbine Muguruza.

Williams led the first set 3-0 only to see Muguruza rattle off six consecutive games to earn the 6-3 win.

During the changeover between sets, Williams sought a trainer, who worked on her and checked her blood pressure. After a delay she went out to play the second set. She played one game, which Muguruza won, and then walked slowly to her chair. After another quick check, the match was called.

Williams walked off the court under her own power.

This is the fourth time Williams has played at Indian Wells since returning in 2015 after a 15-year boycott. And this will mark the second time during that stretch she’s had to retire with an injury. In her first time back, she advanced to the semifinals before pulling out of the tournament before her match against Simona Halep. Williams also missed the 2017 event here due to her pregnancy.

It was clear during the end of the first set that Williams was not herself. She lost power on her serve and her mobility seemed compromised. She looked nothing like she did Friday when she showed her A-game in a 7-5, 6-3 win over Victoria Azarenka.

It looked like Williams still had that fine form at the start as she won the first three games in impressive fashion. But Mugurza upped her game, broke back, and had a fantastic service game to tie the first set at 3-3 where she hit three winners and an unreturnable serve. It was at about this time when Williams seemed to lose her energy quickly, she wasn’t able to run after balls and her serves were all arm and with little power. 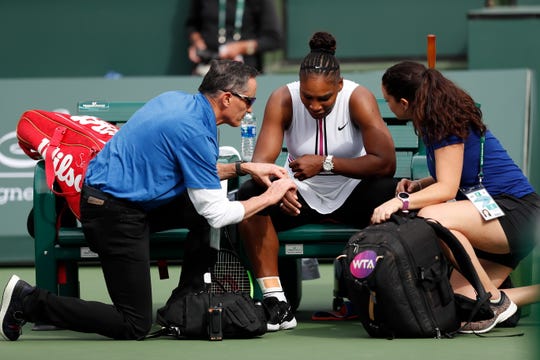 Serena Williams gets her pulse checked by a trainer before retiring from her match against Garbine Muguruza. (Photo: JOHN G. MABANGLO, EPA-EFE)

Muguruza has a French Open and a Wimbledon title to her credit, but she’s never had much success at Indian Wells. In six previous appearances her best result was making it to the Round of 16 and she’s only done that once, in 2017.

This is the first time Muguruza and Williams have met outside of the majors. In fact, the previous two meetings have been for Grand Slam titles. Muguruza beat Williams in the 2016 French Open final 7-5, 6-4 and Williams beat Muguruza 6-4, 6-4 to win Wimbledon in 2015.

Muguruza will play the winner of No. 7 seed Kiki Bertens and Johanna Konta.