This is the eighth installment in our Things We’d Change in Sports series. To see the full list, visit this page.

Start here, because we must: Expansion of the College Football Playoff, while inevitable, is not imminent. And that’s too bad. Eight would be great.

The four-team bracket is much better than college football’s previous system for crowning a national champion — the reviled Bowl Championship Series. But in five years it has demonstrably become ever more a beauty contest, 13 members of a selection committee paying far more attention, it seems, to the eye test than to the few objective landmarks in a vastly uneven landscape.

As a result, perceptions feed on themselves and become crystallized and then feed some more. Even as the conversation surrounding college football keeps expanding, growing more national in scope, the College Football Playoff appears to be contracting, becoming more regionalized. Vast swaths of the country are left out.

FROM YESTERDAY:Time to rotate Olympic sites 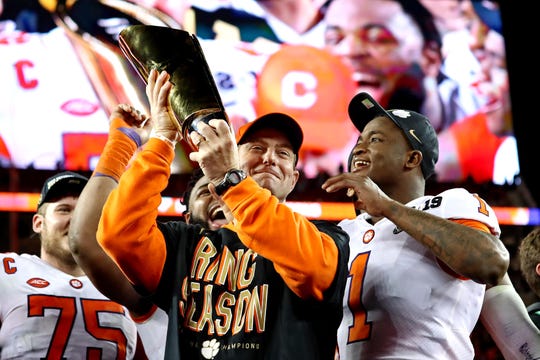 It’s why Big Ten commissioner Jim Delany rumbled last December, after his league’s champion did not make the field for the third consecutive season, about change to the structure. At least for now, the goal is apparently not expansion but inclusion in the current system, a message sent that conference championships and schedule strengths should carry more weight than they seem to have.

But some conferences are in fact better than others? Perhaps — though that, again, is perception. But some leagues play nine games, others only eight. And in the era of 12- and 14-team super conferences, there’s nothing standard about how those eight games rotate across divisions, either.

The commissioners who devised the system want the “four best” teams, but they will continue to differ on how to define them. And while it’s taken as a feature rather than a bug that at least one Power Five champion is always left out, it has also begun to grate on the system. All of which is why expansion should (and will inevitably) happen.

A sport that’s subjective by definition should lean on objective measurements whenever it can. Double the bracket to eight teams, with an automatic berth for each Power Five champion and either two or three at-large berths.

The selection committee can choose the at-large entrants and seed the bracket. Give the Group of Five’s best team a berth if it meets a rankings threshold.

And sorry, but if some four-loss team pulls an upset in a conference championship game, that winner gets the automatic entry; each league gets to choose the method for determining its champion. If the upset victim is good enough, it might still get in. (It’s at least worth wondering, though, whether that team might not be as good as we thought before the upset. Results should matter.)

As any change inevitably does, the playoff system has created unintended consequences. One example: Bowls, college football’s traditional postseason rewards, have been diminished. The overarching focus, ever and always, is the Playoff. Before the season begins. When it ends. Every week in between. Almost everything is viewed through the prism of how it impacts the Playoff.

There are legitimate concerns about the effect of asking unpaid athletes to play 16 games (it seems unlikely the conferences would be willing to give up their lucrative conference championship games). And although playing quarterfinal games on campus would be cool — picture Florida playing in Ann Arbor in mid-December, or Oregon traveling to Tuscaloosa — there are logistical issues with the calendar, including preparing to host games during the weeks leading up to final exams. Those are only a few of the issues that would need to be addressed.

Expansion is inevitable, though not as soon as many hope. Whenever it arrives, it will create a whole new set of problems. It won’t be perfect; nothing ever is. But eight will be a vast improvement over four.