An Ethiopian Airlines flight crashed just after takeoff, killing all 157 thought to be on board
USA TODAY

As officials identify the 157 people killed when an Ethiopian Airlines flight crashed shortly after takeoff Sunday, family, friends and communities are sharing details about their lives.

Some of the victims:

A third-year law student at Georgetown, Asiavugwa was heading to Nairobi after his fiance’s mother died, the university said in a statement. Born and raised in Monbasa, Kenya, he studied international business and economic law.

Before going to Georgetown, the university said he worked to support refugees in Zimbabwe, Kenya, Uganda, and Tanzania.

“Beyond his many commitments and contributions, Cedric’s friends and faculty in this community remember him as a kind, compassionate and gentle soul, known for his beautifully warm and infectious smile,” the statement said.

Adesanmi was on his way to meet with the African Union’s Economic, Social and Cultural Council in Nairobi, said John O. Oba, Nigeria’s representative to the panel. The professor at Carleton University in Ottawa, Canada, previously taught comparative literature at Pennsylvania State University.

“Pius was a towering figure in African and post-colonial scholarship and his sudden loss is a tragedy,” said Benoit-Antoine Bacon, Carleton’s president and vice chancellor.

He won the the inaugural Penguin Prize for African non-fiction writing in 2010.

The 36-year-old from Exmouth, Devon, was heading to Nairobi for the United Nations Environment Assembly. Her father described her as a “very soft and loving woman” and said she traveled to the remote Faroe Islands to prevent whaling.

Manuel Barange, the director of Food and Agriculture Organization of the United Nations fisheries and aquaculture department, tweeted he was “profoundly sad and lost for words.”

More: ‘A punch in the nose for Boeing’: Second fatal crash raises questions about plane’s safety

Dieci helped found the International Committee for the Development of Peoples, a group that works with the United Nations International Children’s Emergency Fund in Northern Africa.

“The world of international cooperation has lost one of its most brilliant advocates and Italian civil society has lost a precious point of reference,” the group wrote on its website.

He joined the Nigerian Foreign Service in 1976 and served in cities including  Tehran, Iran and Vienna, Austria. The Nigerian Ministry of Foreign Affairs said it “prayed that the Almighty God grant his family and the nation, the fortitude to bear the irreparable loss.” 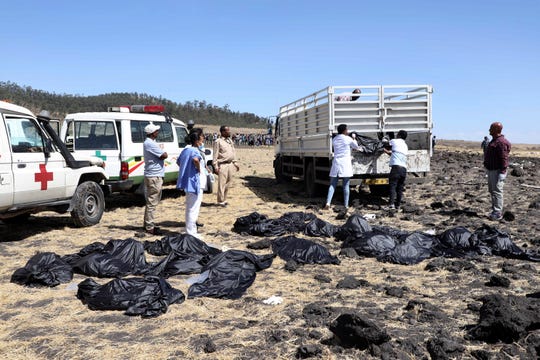 Rescuers remove body bags from the scene of an Ethiopian Airlines flight that crashed shortly after takeoff at Hejere near Bishoftu in Ethiopia. (Photo: AP)

One of the seven victims with the United Nations’ World Food Programme, Ryan was believed to be married with two children.

He has worked on projects creating safe ground for Rohingya refugees in Bangladesh and assessing the damage to rural roads in Nepal blocked by landslides.

Anton Hrnko, a legislator for the ultra-nationalist Slovak National Party, said he was “in deep grief” over the loss of his wife, son and daughter. Their ages were not immediately available.

His son’s employer said he was traveling for a vacation in Kenya. 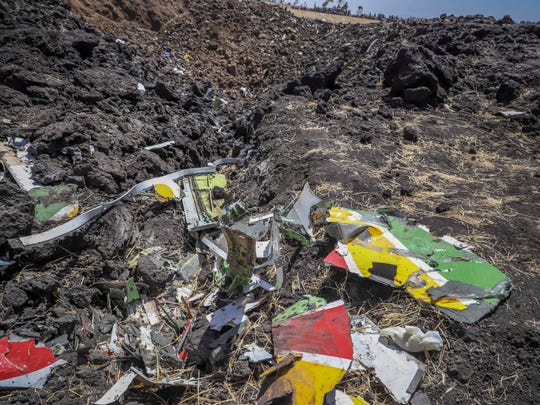 Debris at the crash site of Ethiopian Airlines Flight 302 that crashed shortly after takeoff in Bishoftu, Ethiopia. (Photo: AP)