A Boeing 737 Max 8 crashed in Ethiopia killing everyone on board. The crash of the Ethiopian Airlines plane marks the second deadliest accident involving a Boeing 737 in the past five months. So is there a problem with this particular model?
USA TODAY

Boeing and the FAA should ground the U.S. fleet of 737 MAX 8 jets after one of the innovative planes crashed in Ethiopia, killing 157 and raising safety concerns about thousands of new planes on order around the globe, a former NTSB chairman said Monday.

The MAX 8 is at the vanguard of a new generation of jets being manufactured and sold to many countries. But two of the jets have now crashed – an Indonesian jet plunged into the Java Sea five months ago – and it’s vital to find out what went wrong before too many of the planes are in the sky, said Jim Hall, who headed the National Transportation Safety Board from 1994 to 2001.

With 74 MAX 8s flying in the U.S. and 387 flying worldwide, Hall said the key is to find any potential major problems with the relatively new aircraft because 4,661 more of the planes are on order.

“I felt the responsible thing for the manufacturer Boeing to do is to ground the aircraft until we know exactly what occurred,” Hall told USA TODAY. “It would seem to be that it would be the responsible thing for the Boeing Co. to pause and take a very close look at these two accidents to find a determination what the cause was, so if there’s anything systemic or related to the computer operations of the aircraft, that it can be addressed. That’s the prudent thing to do.”

Hall noted that Boeing suffered two fatal crashes in the early 1990s due to a rudder problem. United Airlines flight 585 crashed March 3, 1991, in Colorado Springs and USAir flight 427 crashed Sept. 8, 1994, after rudders on each of the planes failed.

An NTSB investigation into those crashes led Boeing to redesign the rudder system for the entire 737 fleet.

Each country’s civil aviation authority has its own authority to ground planes. But the FAA has tremendous global influence in affecting the decisions of individual nations and the grounding of planes, so a decision to ground in the U.S. would likely mean a worldwide grounding of the MAX 8.

More than a dozen airlines around the world have already grounded the jets as investigators pore over the shattered remains of the Ethiopian Airlines crash on Sunday.

Boeing, based in the U.S., and the NTSB sent teams  to the crash site to help determine why the Nairobi-bound Boeing 737 MAX 8 nosedived to the ground minutes after takeoff from the Ethiopian capital, Addis Ababa.

Michael Raynor, the U.S. ambassador to Ethiopia, visited the accident site Monday and said the NTSB team would arrive early Tuesday. The airline said the “black box” voice and data recorders had been found.

The Federal Aviation Administration said in a statement Monday afternoon that it is working with the NTSB to gather information. The agency also said it will assess any safety concerns with the Boeing 737 MAX 8 and will take “immediate and appropriate action” if problems are found.

“Until the cause of the crash is known and it’s clear that similar risks aren’t present in the domestic fleet, I believe all Boeing 737 MAX 8 series aircraft operating in the United States should be temporarily grounded,” Senator Feinstein wrote. “This aircraft model represents only a small fraction of the domestic fleet, and several other countries have already taken this important step, including China and Indonesia.”

The senior pilot in the Ethiopia crash, identified as Yared Getachew, issued a distress call moments after takeoff and was told to return to the airport, the airline said. All contact was lost shortly afterward.

A witness said smoke was coming from the rear of the plane before it hit the ground. Tamrat Abera told the Associated Press that the plane rotated twice before crashing and exploding, sending smoke high into the sky. 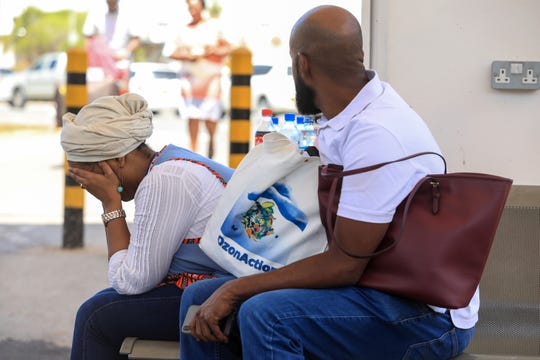 Djiboutian national Hiba, left, is comforted by a relative at Jomo Kenyatta International Airport in Nairobi, Kenya, as she waits for details about her loved one that was on board the Ethiopian Airlines plane that crashed. (Photo: DANIEL IRUNGU, EPA-EFE)

The plane was delivered to the airline in November and had flown only 1,200 hours. The plane underwent a “rigorous” maintenance check Feb. 4. Getachew had more than 8,000 flight hours of experience, the airline said.

The crash came less than five months after an Indonesian Lion Air 737 MAX 8 crashed into the Java Sea, killing all 189 passengers aboard. Both flights experienced drastic speed fluctuations during ascent, and both pilots had tried to return to the airport after takeoff.

As a result, the MAX 8 and its anti-stall system are drawing renewed scrutiny. The plane uses a system called MCAS – Maneuvering Characteristics Augmentation System – to stabilize the aircraft in flight. If sensors feed faulty data to the MCAS, the system can force the aircraft into a dive, according to a Boeing service bulletin Nov. 6. Flight data recovered from the Lion Air crash showed pilots repeatedly tried to get the nose up.

Boeing issued a statement saying it was “deeply saddened” by the tragedy and would provide technical assistance to the Ethiopia Accident Investigation Bureau and the NTSB.

Ethiopia, China and Indonesia grounded their Boeing 737 MAX 8s on all airlines. Some airlines in India and South Korea also grounded them, and Cayman Airways parked its two MAX 8s.

U.S. carriers Southwest and American fly the plane, and both expressed confidence in their fleets. Southwest, which has 34 of the planes and is adding more, said on Twitter that the airline had flown 31,000 flights on 737 MAX planes and plans on “operating those aircraft going forward.”

United Airlines doesn’t fly the MAX 8 but does count 14 MAX 9s in its fleet.

“If you prefer not to fly on one we completely understand and will do what is best in our capabilities to find alternative travel arrangements,” United told a concerned customer on Twitter.

Elaine Chao, the U.S. secretary of transportation, said federal officials are keeping a close eye on the investigation in Ethiopia.

Mike Slack, a pilot and lawyer who has represented victims and their families in plane crashes, said U.S. airlines should ground the 737 Max models until more is known. He said he believes having two fatal crashes in such short succession on a new type of aircraft is unprecedented.

“This to me is a very alarming circumstance,” said Slack, who is also a former NASA engineer. “Do you gamble, continue to operate and gamble that you can figure it out before another one happens, but, at the current rate, it may not be that long, and do you really want to put the traveling public in a position where they’re having to make travel decisions based upon the fact that neither the regulators nor the airlines have opted to ground these aircraft?”

Slack noted that the number of 737 Max planes currently in use is relatively low compared to airlines’ overall fleets.

The victims in the Ethiopia crash came from 35 countries. Ethiopia declared a national day of mourning, and the U.N. flag flew at half-staff.

United Nations Secretary-General Antonio Guterres said the dead included at least 21 U.N. staff members along with others who worked with the organization. Addis Ababa and Nairobi are vital hubs for humanitarian workers, and some had been on their way to a U.N. environmental conference in Nairobi.

“A global tragedy has hit close to home, and the United Nations is united in grief,” Guterres said.

Kenya lost 32 people, more than any country. Kenya’s transport minister, James Macharia, said the welfare of their stunned families was a primary focus.

“Some of them, as you know, they are very distressed,” he said. “They are in shock like we are. They are grieving.”

More: ‘A punch in the nose for Boeing’: Second fatal crash raises questions