British Prime Minister Theresa May said Friday that if Parliament rejects her Brexit deal next week “we may never leave the EU”. (March 8)
AP

Lawmakers voted by 391 to 242 against the deal, the second time they have defeated it in as many months. The loss means increased political and business uncertainly.

In a statement, May said that lawmakers over the following two days would be given the option to vote to leave the EU without an agreement – an idea likely to be rejected – or to ask the EU to delay Brexit beyond the scheduled departure date of March 29.

“This is an issue of grave importance for the future of our country,” May said.

May’s defeat follow last-minute talks with the EU on Monday, when she announced that the biggest roadblock to her Brexit divorce deal had been removed: legally binding changes relating to the status of Ireland’s border with Northern Ireland.

On Tuesday, she needed to persuade skeptical British lawmakers to back her withdrawal agreement with the EU after they overwhelmingly rejected it in January.

“The danger for those of us who want to have faith in the British public and deliver on their vote for Brexit is that if this vote is not passed tonight, if this deal is not passed, then Brexit could be lost,” May told lawmakers in the House of Commons on Tuesday.

Britain is scheduled to leave the EU in less than three weeks. Tuesday’s vote was one of the last opportunities for May to get backing for her agreement from Parliament.

“In politics, sometimes you get a second chance. It is what you do with this second chance that counts. Because there will be no third chance,” European Commission President Jean-Claude Juncker said in a press conference with May late Monday.

The European Commission is the EU’s executive branch. Juncker warned Britain there will be no new negotiations if lawmakers rejected the deal again.

May had sought changes to the agreement with the EU to overcome lawmakers’ concerns about a mechanism in her withdrawal deal designed to keep an open border between Britain’s Northern Ireland and Ireland, a member of the EU.

Years of EU-facilitated friction-less trade and travel across this border is viewed as a key cog in ensuring peace between Northern Ireland’s Irish Catholic community and its British Protestant one. It underpins the Good Friday Agreement, the 1998 peace deal between the British and Irish governments and political parties in Northern Ireland.

The mechanism negotiated by May, known as the backstop, is also a a safeguard that would keep Britain in a customs union with the EU until new trade deal is in place. But supporters of Brexit fear the backstop could be used to bind the country to EU regulations indefinitely, thus significantly watering down its exit from the bloc.

May has not been able to win parliamentary approval for her deal with the bloc on withdrawal terms and future relations. The impasse has raised fears of a chaotic “no-deal” Brexit that could mean major disruption for businesses and people in Britain and the EU’s other 27 members. Under a “no-deal” scenario, experts have warned that there could be travel chaos as well as food shortages and major security lapses. 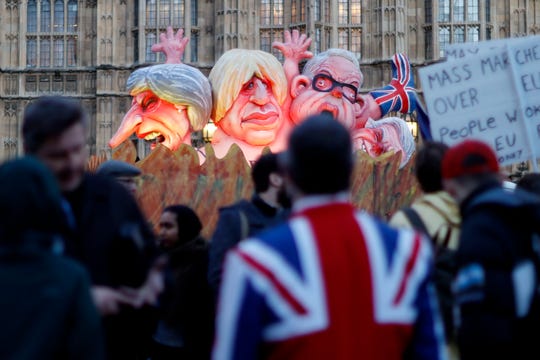 Models of prominent Brexit politicians are driven past the Houses of Parliament in London on March 12, 2019. (Photo: AFP/Getty Images)

May is also under mounting pressure to quit, although she can’t technically be forced from office for another year because she survived an earlier bid to oust her through a no-confidence vote in December.

Ahead of the vote, Geoffrey Cox, Britain’s attorney general, published a legal interpretation of the concessions May claimed from the EU. Cox said the changes to May’s deal “reduced” the risk of Britain being indefinitely marooned in the backstop but that the extra assurances she was given were not sufficient to completely rule it out.

The pound, which had risen on hopes the deal would be passed, slumped by more than 1 percent against the dollar after Cox’s assessment, to trade at $1.3108.

The DUP, which props up May’s minority government, said “sufficient progress has not been achieved” on the key issue of the Irish border.

The European Research Group of pro-Brexit Conservatives, which has dozens of lawmakers as members, said the amendments “do not deliver ‘legally binding changes'”  to the withdrawal agreement, as the government promised.

“In light of our own legal analysis and others, we do not recommend accepting the government’s motion today,” group member Bill Cash said.

Jeremy Corbyn, the leader of the opposition Labour Party, said the result of the vote meant that May should call a general election. She has faced calls of this kind many times since Britain narrowly voted to leave the 28-nation bloc in 2016. 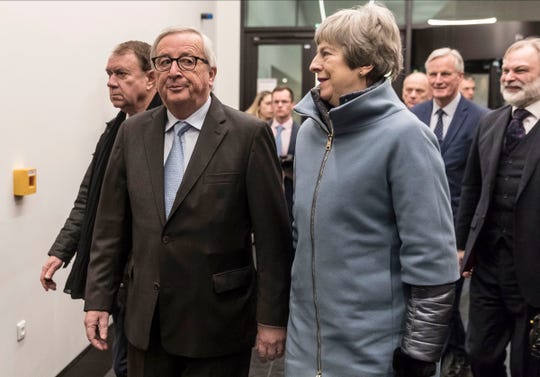