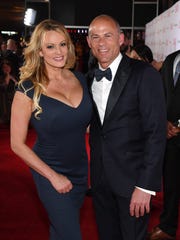 The duo — who achieved celebrity status last year in their legal quest to free Daniels from a hush money agreement aimed at quieting her claims of an affair with President Donald Trump — announced the split on Twitter.

Daniels announced she had replaced Avenatti with attorney Clark Brewster. It’s unclear if she and Brester will continue to with lawsuits involving the president, his former attorney Michael Cohen and her former lawyer, Keith Davidson.

Avenatti said in a statement that his firm notified Daniels last month that they were terminating “our legal representation” of her for “various reasons that we cannot disclose publicly due to the attorney-client privilege.”

Avenatti, in a phone call with USA TODAY, wouldn’t elaborate on the reasoning behind their split but said he was looking forward to the future.

“I have more business right now than I have in any time in my life, by a factor of 10,” Avenatti told USA TODAY. “I get 100 inquiries from prospective new clients a day.”

Indeed, Avenatti has managed to stay in the spotlight since his representation of Daniels, most recently with his role in the R. Kelly sexual abuse saga. He also flirted with a run for president.

But over the last year, Avenatti has had his ups and downs. He was ridiculed for his representation of Julie Swetnick, who made a series of bombshell allegations against Supreme Court Justice Brett Kavanaugh during his confirmation hearings this summer.

The allegations weren’t viewed as credible by a number of lawmakers. Many Democrats blamed Avenatti and his client for their role, saying they helped Kavanaugh and Republicans who wanted another conservative on the high court.

Soon after, Avenatti was arrested on suspicion of domestic violence after a fight with his girlfriend in California. Prosecutors declined to file official charges in the case.

Avenatti and Daniels’ split follows a judge’s decision last week to throw out Daniels’ hush money lawsuit against Trump. U.S. District Court Judge S. James Otero said it was irrelevant after Trump and his former personal lawyer, Michael Cohen, agreed not to penalize Daniels for violating a nondisclosure agreement she signed in exchange for a $130,000 payment.

In seeking to dismiss the lawsuit, the president and Cohen effectively gave Daniels what she was initially seeking. They vowed not to seek penalties for breaking the deal.

Daniels had fought dismissal of the case because she wanted to record sworn testimony from Trump, who denies the affair.

The split also follows allegations by Daniels in November that Avenatti filed a lawsuit against her wishes and raised money for her legal defense without her permission.

Daniels said a defamation lawsuit filed against the president, one of several lawsuits the pair filed this year, was done “against my wishes” and she’s tried for months to get information about crowdfunding accounts he’d set up for her defense and has been met with silence.

“He has spoken on my behalf without my approval. He filed a defamation case against Donald Trump against my wishes,” Daniels said of the lawsuit, which she lost in October and was ordered to pay the president’s legal fees.

She continued: “He repeatedly refused to tell me how my legal defense fund was being spent. Now he has launched a new crowdfunding campaign using my face and name without my permission and attributing words to me that I never wrote or said.”

The pair later made up.