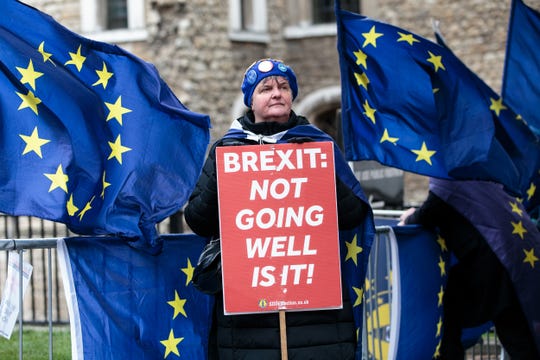 Anti-Brexit protesters demonstrate outside the Houses of Parliament on March 13, 2019 in London. (Photo: Getty Images)

LONDON – British lawmakers will decide Thursday whether to seek a Brexit delay, a move that follows months of political deadlock over Prime Minister Theresa May’s divorce deal that has caused a crisis over Britain’s departure from the European Union.

The vote in Parliament later Thursday comes on the heels of an attempt by lawmakers to block the country from leaving the EU on March 29 without a formal withdrawal agreement. May’s contentious departure deal has already been rejected by British parliamentarians twice, but there is even less appetite for a “no deal” exit.

A delay, if it passes in Parliament, would still need to be approved by the leaders of the EU’s 27 other members and May has indicated that she will make a third attempt – likely next week – to get lawmakers to support her Brexit deal. Further complicating matters, even if Brexit is delayed, Britain will depart the EU without a deal if one is not agreed upon during the delay period because that is the default legal position.

It’s not clear how long any extension would be and whether conditions would be imposed. Donald Tusk, the president of the European Council, the Brussels-based body that sets the bloc’s overall political direction and priorities, said in a tweet Thursday that he would appeal to EU leaders “to be open to a long extension if the U.K. finds it necessary to rethink its Brexit strategy and build consensus about it.”

However, the bloc has made it clear that while it could consider a delay to Brexit, after two years negotiating with May it is not open to more talks on her deal, meaning the prime minister needs to find a way to convince British lawmakers to accept it.

Lawmakers are desperate to avoid a “no deal” withdrawal because decades of EU legislation that Britain has adopted covers a range of issues from transportation policy to workers’ rights that would effectively evaporate overnight.

A “no deal” Brexit, according to analysts and political scientists, could lead to chaos at ports, grounded flights, traffic jams and food shortages. Buckingham Palace has repurposed a Cold War-era emergency escape plan for Queen Elizabeth II in the event this default EU-divorce position causes social unrest or other disturbances.

Michael Gove, Britain’s environment secretary, told Parliament on Wednesday night that tens of thousands of businesses were not prepared for a “no-deal” exit.

May and the EU have already signed off on critical issues accompanying the country’s EU divorce, such as how much Britain will need to pay to leave the bloc (about $50 billion), and what rights EU nationals living in Britain under the bloc’s reciprocal-working-rights arrangements will have after the separation (similar to what they have now, but they’ll need to prove they are not a burden on the state).

But the deal has fallen afoul of British lawmakers over the thorny question of the land border between Northern Ireland (part of Britain) and Ireland (part of the EU). This border is currently open to facilitate friction-less trade and travel across it, but its current status is also viewed as an important element in ensuring peace between Northern Ireland’s Irish Catholic community and its British Protestant one.

May and the EU have devised a plan to keep this border open but British lawmakers who support Brexit fear the plan effectively tethers Britain to the EU.

Britain’s Parliament has dealt a major blow to Prime Minister Theresa May, resoundingly rejecting her Brexit deal just 17 days before the U.K. is due to leave the bloc. (March 12)
AP