Student Dylan Chidick of Jersey City, NJ, who at one time was homeless, was accepted to 17 colleges and received a scholarship. March 14, 2019.
Amy Newman, NorthJersey

WOODLAND PARK, N.J. – In the wake of the nation’s largest-ever college admission scandal, a Jersey City teen is defying the odds through hard work, coming back from homelessness to receive nearly 20 college acceptance letters.

Dylan Chidick, 17, has received 17 college acceptance letters, receiving a yes from nearly all of the 18 schools he has applied to. Dylan, who moved with his family from Trinidad when he was seven years old, is on a quest to become the first person in his family to go to college.

“I wasn’t really sure if I wasn’t going to get into college because I don’t have the perfect grades or perfect GPA or perfect SAT score,” said Dylan. “But I knew that when college admissions read my essay and see me as a whole person, I’d be okay.”

More: Everything you need to know about the nation’s largest-ever college cheating scandal involving Felicity Huffman and Lori Loughlin

More: How a Kentucky distillery owner allegedly bribed her son’s way into a top university 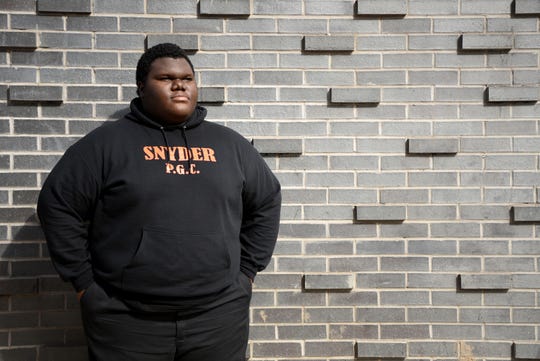 Formerly homeless student Dylan Chidick of Jersey City, NJ has been accepted to seventeen colleges. On Thursday, March 14, 2019 Chidick received a full scholarship for tuition, room and board from “Give Something Back.” Chidick and his mother, Khadine Phillip received housing from Women Rising in Jersey in August 2017. (Photo: Amy Newman/NorthJersey.com)

Although Dylan has always wanted to go to college, it was a quick conversation with his mom Khadine Phillip that sealed the start of his ambitious journey.

“He came home one day and said ‘Mom do you want me to go to college?,'” Phillip said. “And I said ‘Yup. You’re going to be the first one in our family to go to college.'”

Along the way, Dylan, his mom and his younger twin brothers have battled homelessness, illness and financial trouble before finding a home where Dylan could plan his dream of attending college.

More: I got into 39 colleges without cheating: What applying to schools looks like in 2019

His twin brothers both have aortic stenosis, a heart condition that restricts blood flow from the left side of the heart to the right side. When the boys’ mother fell ill and was unable to work, the bills became too much to bear and their landlord evicted the family, Phillip said.

“I was able to take them to a motel for the night,” Phillip recalled. “I couldn’t get into the shelter until the next day.”

For a month and a half, Phillip, Dylan and his brothers lived in a shelter, she said. It wasn’t until 2017, when Phillip connected with Village of Families, a HUD-funded housing program, that the family was able to get help.

“Unfortunately, there often are not enough resources, said Anne Christensen, director of Village of Families, part of WomenRising, a nonprofit that offers aid to women and families. “Fortunately in their case, while in the shelter, the central intake for our continuing care was doing outreach to assess who’s out there, who needs services and who needs the services available.”

College admissions scam: Do all students cheat on their college applications? No, consultants say, but there are plenty of problems. 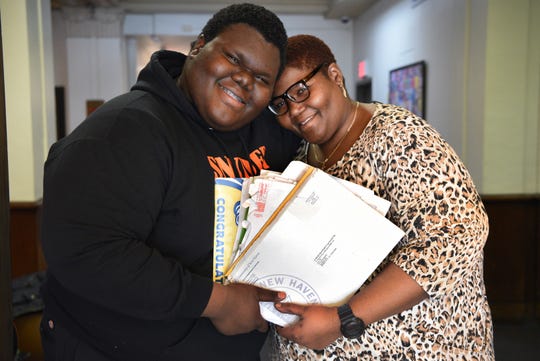 Formerly homeless student Dylan Chidick of Jersey City, NJ and his mother Khadine Phillip, hold his seventeen acceptance letters from college. On Thursday, March 14, 2019 Chidick also received a full scholarship for tuition, room and board from “Give Something Back.” Chidick and his mother, Khadine Phillip received housing from Women Rising in Jersey in August 2017. (Photo: Amy Newman/NorthJersey.com)

By July 2017, Dylan and his family moved into their new home, a place where Dylan could safely await those happy letters.

“The moral of this tale is people need resources to get through challenging moments of their lives, which come to us through no fault of their own,” said Christensen. “He could now think ‘I don’t have to work on survival. I can work on thriving.'”

For Dylan, seeing his mother push to provide for him and his brothers is one of the reasons he wants to go to college. Her strength became his drive, and made him realize that reaching out wasn’t a sign of failure.

“Being in a shelter I saw how vulnerable my mom and my entire family were,” said Dylan. “Usually we’re very independent and do not ask for help. Seeing them reach out and asking for help from an organization it made me reassess myself and feel like it’s okay to ask others for help and it’s okay to be vulnerable.” 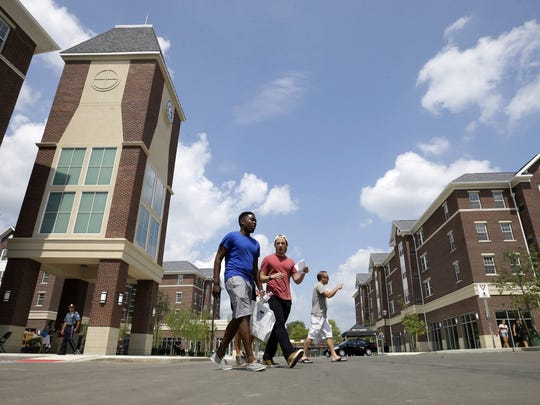 It was on those visits that he found his target school, TCNJ. Dylan hopes his only pending application returns the lucky letter he’s been waiting for: an acceptance letter from TCNJ, where he hopes to major in political science and minor in history, his favorite subject.

Phillip, on the other hand, is partial to York College of Pennsylvania, she said.

Mark Riddell: The ‘really smart guy’ who aced SATs for rich students: ‘I will always regret’ the scandal

‘So that’s what he was up to’: Rick Singer, architect of scam, peddled a ‘side door’ to college admissions

For his college admission essays, Dylan chose not to write about his homelessness. At first, he was ashamed of it, he said. Instead he wrote about racism. Dylan wrote about how people who say they don’t see color, can’t see who someone really is, he said.

But ever since his first acceptance to New England College in October, the wave of letters have shown Dylan that he is finally seen for who he truly is, he said.

“I thought that people were listening to me and understanding me and seeing who I was as a whole entire person,” he said.