PYONGYANG, North Korea – North Korean leader Kim Jong Un will soon decide whether to continue diplomatic talks and maintain his moratorium on missile launches and nuclear tests, a senior North Korean official said Friday, adding that the U.S. threw away a golden opportunity at the recent summit between their leaders.

Vice Foreign Minister Choe Son Hui, addressing a meeting of diplomats and foreign media, including The Associated Press, in Pyongyang said the North was deeply disappointed by the failure of the two sides to reach any agreements at the Hanoi summit between Kim and President Donald Trump.

She said Pyongyang now has no intention of compromising or continuing talks unless the United States takes measures that are commensurate to the changes it has taken – such as the 15-month moratorium on launches and tests – and changes its “political calculation.” 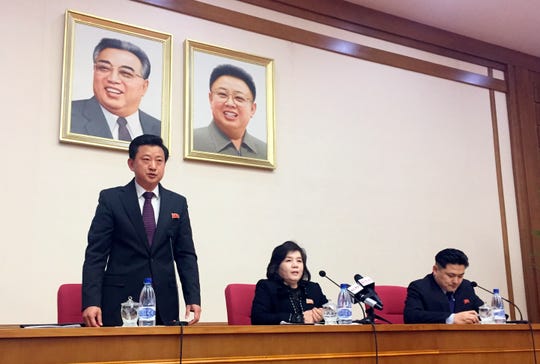 Choe, who attended the Feb. 27-28 talks in Hanoi, said Kim was puzzled by what she called the “eccentric” negotiation position of the U.S. She suggested that while Trump was more willing to talk, an atmosphere of hostility and mistrust was created by the uncompromising demands of Secretary of State Mike Pompeo and National Security Adviser John Bolton. She said statements by senior Trump advisers since the summit have further worsened the climate.

More: South Korea, US sign deal on Seoul paying more for US military

Even so, she said personal relations between the two leaders are still good “and the chemistry is mysteriously wonderful.”

She said it was entirely up to Kim whether to continue the launch and test moratorium, and said she expects he will “clarify his position” within a short period of time.

“On our way back to the homeland, our chairman of the state affairs commission said. ‘For what reason do we have to make this train trip again?’” she said. “I want to make it clear that the gangster-like stand of the U.S. will eventually put the situation in danger. We have neither the intention to compromise with the U.S. in any form nor much less the desire or plan to conduct this kind of negotiation.”

Choe questioned the claim by Trump at a news conference after the talks in Hanoi broke down that the North was seeking the lifting of all sanctions against it, and said it was seeking only the ones that are directed at its civilian economy. After the summit had ended, State Department officials clarified that was indeed the North’s position, but said the lifting of economic sanctions was such a big demand that it would essentially subsidize the North’s continued nuclear activity.

More: Exclusive: Pompeo on the failed North Korea talks, Otto Warmbier and his own trip to Iowa

Choe said it was the U.S. that was being too demanding and inflexible and called the demand that denuclearization come before sanctions are eased “an absurd sophism.” She added that while South Korean President Moon Jae-in has tried to help bring the U.S. and North Korea together to talk, the South is “a player, not an arbiter” because it is an ally of Washington.

She said even though the people, military and officials of the munitions industry have sent Kim thousands of petitions to never give up the nuclear program, he went to Hanoi to build trust and carry out mutually agreed commitments “one by try and step by step.”

“What is clear is that the U.S. has thrown away a golden opportunity this time,” she said. “I’m not sure why the U.S. came out with this different description. We never asked for the removal of sanctions in their entirety.”

“This time we understood very clearly that the United States has a very different calculation to ours,” she added.

She refused to comment directly when asked by one of the ambassadors about news reports the North may be preparing for another missile launch or satellite launch.

“Whether to maintain this moratorium or not is the decision of our chairman of the state affairs commission,” she said, using one of Kim’s titles. “He will make his decision in a short period of time.”

Journalists were not allowed to ask questions during the briefing, which lasted nearly an hour.

In city centers, a determined effort to diversify hockey

Real change in baseball is yet to come