Police are searching for an inmate who escaped a Missouri jail and then stole a police car from Oklahoma police officers who were attempting to re-arrest him days later.

Travis Lee Davis, 30, disappeared from his cell late Saturday night where he was being held on $110,00 bond for “various charges including  kidnapping, endangering the welfare of a minor, domestic assault, resisting arrest, and parole violation,” according to the Pettis County Sheriff’s Department. He was arrested in February after allegedly threatening to kill his pregnant girlfriend and an 8-month-old baby during a standoff with police, KRCG 13 reported.

Police believe Davis escaped by climbing into the ceiling of his cell, “across the rafters, through a maintenance access hole in the concrete wall, into a maintenance closet,” and then fleeing on foot through a side exit, according to a probable cause statement obtained by the station.

Davis was charged Monday with escape from confinement and issued a $100,000 cash-only bond, according to the Sedalia Democrat. He successfully evaded law enforcement until police were called to the Choctaw Travel Plaza in Heavener, Oklahoma, around 7 a.m. Wednesday by a woman who said she’d been kidnapped, the Democrat reported.

The woman told police a man had forced her to drive at gunpoint and then fallen asleep while they were stopped at the gas station, according to the paper.

The alleged kidnapper, later identified as Davis, was taken into custody and placed into the back of the patrol car, according to a Facebook post from the LeFlore County Sheriff’s Department. 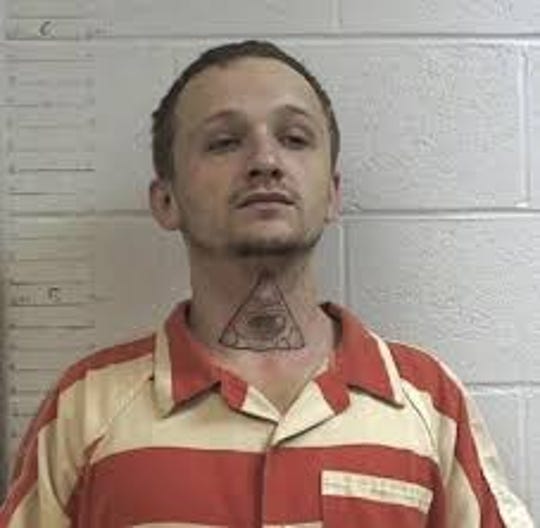 Travis Lee Davis escaped from Pettis County Jail over the weekend and then evaded capture by stealing a police car in Oklahoma. (Photo: LeFlore County Sheriff)

“He attempted to escape from officers but they caught him, cuffed him and put him in the car. He somehow got the cuffs to the front of him and somehow managed to get through the window in the partition while my guys were interviewing the victim,”  Heavener Police Chief Ty Armstrong told the Democrat. “He went through the window, stole the car and went approximately 2 miles and crashed then fled on foot.”

Police told local news that after Davis squeezed his 6-foot, 150-pound frame through the window the separates officers from suspects, he was able to drive away even though the officers had the key fob, KHBS reported.

Armstrong told the station he believes Davis may have jumped onto a freight train that was in the area during the escape.

As police continue to search for Davis, they are also on the lookout for the alleged kidnapping victim Christole Hurst, 23, who they believe may have helped him escape from jail, NBC News reported.

LeFlore County Sheriff Rob Seale told NBC Hurst will also face pending charges in Missouri and Oklahoma, including accessory to an escape and aiding and abetting a fugitive.