An attorney for the families of the victims killed at Sandy Hook Elementary says “no company is above the law”. The Connecticut Supreme Court ruled that gun maker Remington can be sued over how it marketed its rifle used in the 2012 shooting. (March 14)
AP

By ruling against a gun-maker, the Connecticut Supreme Court appears to have pierced a legal shield that could lead to more lawsuits and damaging disclosures involving the arms industry, gun control advocates say.

The court ruled Thursday that Remington Arms, maker of the semiautomatic rifle that was used to kill 20 children and six educators at Sandy Hook Elementary School in 2012, can be sued because of the way the gun was marketed.

The 4-3 decision came despite protections that Congress granted in a 2005 law that shielded makers from liability when their guns are used in the commission of crimes. In this case, Remington made and marketed the Bushmaster rifle that was used to carry out the massacre in Newtown, Connecticut.

The lawsuit contends that Remington, based in Madison, North Carolina, advertised the gun model, which is based on the military’s AR-15, in ways that glorified it to young people and that the weapon is inherently dangerous.

“The families’ goal has always been to shed light on Remington’s calculated and profit-driven strategy to expand the AR-15 market and court high-risk users, all at the expense of Americans’ safety,” attorney Joshua Koskoff said, who represented the plaintiffs. “Today’s decision is a critical step toward achieving that goal.”

Neither a spokesman for Remington nor the National Rifle Association could be reached for comment.

“The regulation of advertising that threatens the public’s health, safety, and morals has long been considered a core exercise of the states’ police powers,” Justice Richard Palmer wrote for the majority, adding he didn’t believe Congress envisioned complete immunity for gun-makers.

The legal chiefs of two gun control organizations said the ruling is just the start.

The decision is “a victory for the principle that no industry is above the law or above accountability,” said Adam Skaggs, chief counsel for the San Francisco-based Giffords Law Center to Prevent Gun Violence, in a statement. The court rejected the notion “that any industry, no matter how powerful, can slam the courthouse doors to the victims of illegal marketing practice.” 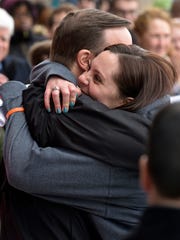 Erica Laffery, daughter of slain Sandy Hook Elementary School Principal Dawn Hochsprung, gets a hug from Connecticut Sen. Chris Murphy after she delivered a speech at the March for Our Lives rally in Hartford, Conn. (Photo: H JOHN VOORHEES III/AP)

As a result of the ruling, “Remington’s nightmare will come true” as plaintiffs’ lawyers can now closely examine the gun-maker’s marketing practices,” said Jon Lowy, vice president for legal affairs for the Brady Campaign to Prevent Gun Violence in Washington, D.C., in an interview.

It’s the kind of ruling, he said, that is sure to send shock waves through the gun industry.

“Executives are going to have to answer some questions. What were they thinking and why were they marketing these weapons of war to the general public,” Lowy said.

The Connecticut ruling overturned a lower-court decision. The wrongful-death lawsuit was brought by a survivor and nine of those killed in the attack.

“The regulation of advertising that threatens the public’s health, safety and morals has long been considered a core exercise of the states’ police powers,” wrote Justice Richard Powers in the majority opinion.

Adam Lanza was 20 when he shot and killed his mother at home, then went to the Newtown school, where he gunned down first-graders and educators with a Bushmaster XM15-E2S rifle. Lanza then killed himself.