The park posted on Facebook shortly after 11 a.m. Saturday that April was in labor. Live video at around 11:15 a.m. showed a hoof emerging from April.

At 11:33 a.m. Saturday, the park sent out the text alerting fans the giraffe was in labor. The park stated on the website, “The Animal Adventure Giraffe Team will send out a text notification, immediately after confirming April is in labor!” There was a $5 charge to sign up for the alert.

This is the second time thousands waited for one of April’s bouncing babies to enter the world. In 2017 it took just a few hours after the birth alert went out until April’s new baby was seen.

More: April the Giraffe is ready to be a mama again at any moment and we’re riveted 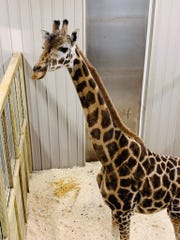 Tajiri was given his name through an online voting contest about two weeks after he was born. It’s a Swahili name for “hope” and “confidence.”

Just a few weeks ago, the park added new female companion for Taj. Her name was chosen the same way. It’s Johari, which is Swahili for “Jewel.”

This new baby will get a name in the same way.