Sayoc, a 56-year-old Florida resident, initially pleaded not guilty during a November federal court arraignment in Manhattan on allegations he used weapons of mass destruction in a domestic terrorism spree that raised fear and jangled nerves across the nation last year.

However, after prosecutors and defense lawyers held a Friday telephone conference with U.S. District Judge Jed Rakoff, a new court docket entry disclosed that a pretrial hearing scheduled for March 21 “is now a plea” session.

The filing did not disclose which charges would figure in the expected guilty plea. Sayoc is charged in a 30-count criminal indictment. If found guilty on the most serious charges, he could face life in prison.

Additionally, convictions on a combination of some of the criminal counts could require the judge to impose a sentence of life behind bars. Sayoc’s attorneys may use the expected guilty plea to seek a lighter sentence and give Rakoff discretion over the penalty.

The terror spree erupted in October with suspicious mailings across the United States. 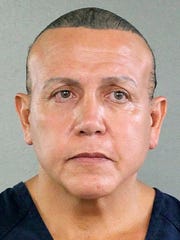 Investigators found the packages and disarmed the suspected pipe bombs before any exploded. No one was injured.

More: For accused pipe bomber Cesar Sayoc, life was a stage where the truth was a bit player

Authorities captured Sayoc in Plantation, Florida, on Oct. 26, 2018. They tracked him down through evidence from FBI laboratory tests that allegedly linked him to 11 of the 16 mailing packages.

Sarah Baumgartel, one of three federal defenders assigned to represent Sayoc, signaled during the November hearing that she might explore a court disposition that could resolve the charges before trial. She declined to comment on the case after the hearing, and could not be reached on Saturday.

Abdul Aziz ran toward gunman to stop him