Too often in baseball – heck, sports in general, life at large – the outcomes are incongruous with reality.

The wrong guy gets the big deal. The franchise player is somehow allowed to wander. The flavor of the month lucks into a windfall, and the accomplished and deserving are left unfulfilled.

Then a transaction comes along such as Mike Trout’s impending 12-year contract extension with the Los Angeles Angels that will reportedly pay him more than $430 million, and suddenly everything falls into place.

The highest average annual value – some $36 million per season, wrestling that title from the great but not historically significant pitcher, Zack Greinke.

And the greatest gross earnings in baseball history – an estimated $508 million, exceeding the $441 million Alex Rodriguez earned, as well as the $378 million Bryce Harper will amass once his freshly-signed 13-year, $330 million deal with Philadelphia runs its course.

It is all funny money, of course, but then again so are the dollars claimed by movie stars and CEOs and dumb-luck entrepreneurs.

Few, if any, are as good at their job as Trout is at his. 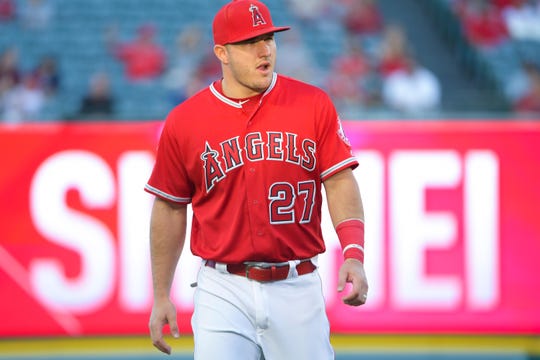 If you don’t know by now, his two MVP awards by age 24 and his six MVP finishes of second or better and his 1.088 career OPS and 64 Wins Above Replacement, if that’s your jam, place him nearly second to none in baseball history.

When an athlete sets a new plateau for earnings, or workers demand a greater share of profits from their employers, the old guard will inevitably make themselves heard via email or social media.

“If Player X receives this much money,” they cry, “how much would Willie Mays get paid today?”

Well, now we have our answer.

Trout is as close to the Mays of his generation as we’ll get. That Mays didn’t gross even $2 million in his career thanks to baseball’s reserve clause that tied player to franchise for life doesn’t mean Trout and his contemporaries shouldn’t get theirs.

No, this deal, for once, matches an industry’s sky-high revenue with its greatest talent.

It comes when major leaguers’ wariness of management is at its highest level in three decades, since owners were found guilty of colluding to suppress their salaries. It comes after a winter in which Harper – who now tops Trout only in perceived marketing cachet – and fellow 26-year-old Manny Machado found a highly limited market for their services.

Trout need not worry about such indignities; he will head to the Hall of Fame someday as an Angel, having never experienced free agency.

And isn’t that how it’s supposed to go? Trout committed to his club early – with a six-year, $144.5 million deal after his third season, a contract that bought out his original two years of free agency.

As the song says, Trout didn’t necessarily need his respect in diamonds, but in the end, that came, too. The Angels surely realized there was little sense in losing a generational talent and dug deep to make sure he’d not be their modern-day Nolan Ryan.

That the money goes to a player stunningly humble given his vast accomplishments, widely acclaimed as a model teammate, determined to maintain his status atop baseball’s mountaintop, is all the better.

This is not Kevin Brown scoring the first $105 million deal in baseball history. Or the vagaries of Jimmy Garoppolo’s rookie contract nearing an end prompting the San Francisco 49ers to give him, at the time, the biggest contract in NFL history. Or Jon Koncak, forever known as “Jon Contract” when the middling NBA center stunned the league by receiving a $13 million deal way back in 1989.

No, this is a highly deserving player setting a new plateau, already the greatest player of his time, and now adding the moniker best-paid player in baseball history.

He will wear it well.

Angels get a bargain with largest sports contract ever