One day after the FAA decided to temporarily ground Boeing’s 737 Max 8 aircrafts across the country, travelers have mixed feelings on the move. (March 14)
AP

Federal investigators and prosecutors appear to be raising questions about the process that led to the certification of Boeing’s 737 Max jetliners in the aftermath of two deadly crashes.

The Wall Street Journal, citing unnamed sources, said a grand jury issued a subpoena dated the day after the crash of an Ethiopian Airlines’ 737 Max 8. The subpoena may be taking aim at the regulatory approval process that went into the plane’s design.

It seeks emails, messages and documents and lists a Justice Department prosecutor as the contact, the Journal reported.

The Seattle Times, moreover, reported that the Federal Aviation Administration urged its safety engineers to delegate more oversight to Boeing as the aerospace giant was hustling to develop the control systems on the 737 Max ahead of a competing jetliner from Europe’s Airbus. That report was also based on unnamed sources. 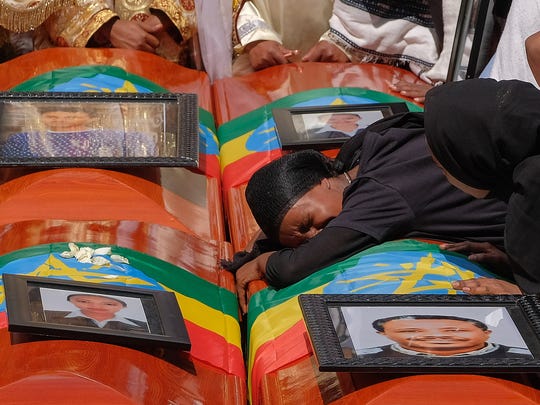 Both accounts point to a new direction in the investigation of the crashes as analysis continued on the black boxes from the Ethiopian crash that killed 157 passengers and crew.

Neither the Justice Department, FAA nor Boeing responded to USA TODAY’s request for comment on Monday.

The rush to create an updated version of the venerable 737 has raised questions about whether the basic design dating to the 1960s could handle today’s new engines and technology.

“This is really pushing the bounds of reasonableness with the 737. When initially designed, it was a very stable aircraft, but it’s gone through four generations of changes,” said Daniel Rose, an attorney for the firm of Kreindler & Kreindler, which specializes in aviation disaster litigation.

And, he said, issues surrounding design changes appear to have been made worse by a “cozy relationship” when it came between Boeing and the FAA during the plane’s development.

The Seattle Times reported sources say Boeing understated how dramatically the plane’s automated anti-stalling system — which has been at the center of the crash probes — would move the plane’s horizontal stabilizer. It also didn’t properly address how the system would reset itself after pilots tried to intervene and how such a critical system could be designed to rely on one, instead of two or more, sensors.

Boeing said Thursday that it will continue building 737 MAX aircraft but the company won’t be able to deliver them to customers or get paid until the FAA lifts its grounding order. (Photo: Wikipedia (LLBG Spotter))

Some of the answers may come from analysis of the 737’s cockpit and flight data recorders, which have been taken to France for analysis.

For Boeing and airlines operating the Boeing 737 Max, the answers and a remedy to whatever issues arise can’t come soon enough. The worldwide fleet of 371 Max 8 and 9 models was grounded last week when the U.S. joined other nations in ordering them out of the skies until the cause of the crashes is found.

Some wonder why a cause wasn’t found sooner after the Lion Air crash.

“Either you should have fixed it or you shouldn’t be flying it. That’s where Boeing the FAA didn’t do their job,” said Michael Barr, an air crash expert and senior instructor for the University of Southern California’s Viterbi School of Engineering.