New Zealand’s Prime Minister Jacinda Ardern vows to never mention the suspected attacker’s name and urges others to do the same.
Newslook, Newslook

She has vowed to cover the funeral costs. She has offered financial assistance to grief-stricken families. She has pledged swift action on gun control but also delicately consoled and embraced and mourned in a Muslim-style headscarf, known as a hijab.

Less than a week after 50 people were killed and dozens wounded in shootings at two mosques in Christchurch, New Zealand, the country’s Prime Minister Jacinda Ardern has won praise at home and abroad for her efforts to honor the dead, comfort the bereaved, unite political opponents and stand up to right-wing extremism.

“You may have chosen us,” Ardern said last week, the anger rising in her voice as she condemned the suspect in Friday’s attacks. “But we utterly reject and condemn you.”

On Tuesday, Ardern went further, telling New Zealand’s Parliament that she would deny the man responsible for the nation’s worst terror attack in modern history the one thing he likely craved: fame.

“He is a terrorist, he is a criminal, he is an extremist, but he will, when I speak, be nameless, and to others I implore you: Speak the names of those who were lost rather than the name of the man who took them. He may have sought notoriety but we in New Zealand will give him nothing – not even his name.”

Ardern opened her speech to lawmakers in New Zealand by using the Arabic greeting “As-salamu alaykum.” In English, this translates as “Peace be upon you.”

Her unflinching response to the shootings has not gone unnoticed.

Abdulkhaleq Abdulla, a professor of politics in the United Arab Emirates, described Ardern’s reaction to the assault as “stoic and firm.” Sadiq Khan, London’s first Muslim mayor, referred to her commitment to “inclusivity and equality.” The Crisis Magazine, the official publication of NAACP, the Baltimore-based civil-rights organization, tweeted a picture of Ardern with the caption, “Dignity. Grace. Courage.”

After a conversation with President Donald Trump, Ardern was asked in a press conference what Trump could do to help the situation given that, unlike her, he did not view right-wing terrorism as a growing problem.

Express “sympathy and love for all Muslim communities,” she replied. 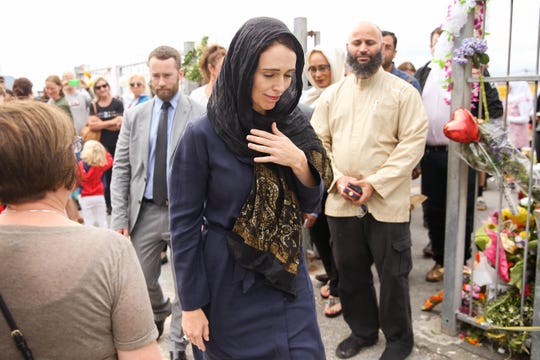 “The prime minister, when she came wearing her scarf, that was big for us,” Dalia Mohamed, who was mourning Hussein Mustafa, her daughter’s father-in-law, killed alongside more than 40 people at Christchurch’s central Al Noor mosque, told media in New Zealand. Ardern met with families at the mosque over the weekend.

New Zealand’s leader has since announced that the nation’s gun laws will be reformed.

All gun owners in New Zealand must have a license, which they can get from age 16 (age 18 for semi-automatic weapons) but the weapon itself does not need to be registered with authorities, according to the Council of Licensed Firearms Owners, a New Zealand lobby group. Ardern said the suspect in Friday’s attacks had a license and owned five guns. The majority of firearms owners in New Zealand are farmers or hunters.

According to GunPolicy.org, New Zealand is among a handful of countries where police officers are routinely unarmed when they are on patrol. Officers in Britain, Ireland, Norway and Iceland also carry firearms only in special circumstances.

Australia and Britain both changed their gun laws in response to mass shootings.

The Australian government overhauled its guns laws in 1996 after 35 people were murdered during a shooting spree in Tasmania. Australia banned all semi-automatic weapons and restricted certain handguns. It offered to buy back prohibited firearms.

A 2016 study published in the Journal of the American Medical Association found that Australia hadn’t had a fatal mass shooting – one in which five or more people are killed – since the 1996 shooting. In the 18 years prior to the new laws, there were 13.

The turning point for Britain came in 1996 when a man used a legally owned handgun to kill 16 young children and a teacher at a school in Dunblane, Scotland. In the aftermath, all private ownership of handguns was banned.

Since then, there has been one mass shooting, in 2010, in Britain.

Ardern is expected to provide details about New Zealand’s reforms in the coming days.

This is not the first time that she has been widely feted.

When Ardern took office in 2017 as an unmarried 37-year-old she was not only the country’s third female prime minister and the world’s youngest world leader, she was also about to give birth. She became just the second woman in history to give birth while an elected head of state and the first elected leader ever to take maternity leave.

Ardern made history in 2018 when she brought her three-month-old daughter to a United Nations General Assembly meeting, the first time it had been done.

Ardern is only second elected leader to give birth while in office, after #Pakistan’s Benazir Bhutto in 1990. pic.twitter.com/gNUv96LMao

“It was a no-brainer to say, ‘Right, I’ll take care of her, you take care of the country,'” Ardern’s partner Clarke Gayford, a television host, told The New Yorker magazine as the pair traveled to New York for the UN meeting with their daughter Neve.

“I don’t want to ever give the impression that I’m some kind of wonder woman,” Ardern said around that time as interest in her intensified, adding: “Or that women should be expected to do everything because I am. I’m not doing everything.”

Still, such is Ardern’s popularity that the term “Jacindamania” was coined to describe her rising stature as a young female politician who, along with Canada’s Prime Minister Justin Trudeau and France’s leader Emmanuel Macron, has been hailed as the anti-Trump for her progressive policies on immigration, education and other social issues.

Ardern appeared on the cover of Vogue magazine in September last year and the glossy fashion magazine described her as a “thoroughly modern” feminist hero.

When she was named by Time magazine in 2018 as one of the world’s 100 most influential people, Sheryl Sandberg, Facebook’s chief operating officer, described Ardern as a “political prodigy” who was “changing the game” for women around the globe.

On Tuesday, it was Ardern who had something to say about Facebook.

The suspect in the mosque attacks sent a white supremacist manifesto to Ardern’s office just before Friday’s massacre. He also livestreamed the attack on Facebook. The social media platform said it removed 1.5 million versions of the video during the first 24 hours.

Arden said she had received “some communication” from Sandberg on the issue, but  she expressed frustration that four days later the footage remained online.

“We have been in contact with Facebook; they have given us updates on their efforts to have it removed, but as I say, it’s our view that it cannot – should not – be distributed, available, able to be viewed,” she said. “It is horrendous and while they’ve given us those assurances, ultimately the responsibility does sit with them.”

Zion Williamson to Cleveland? Why Cavs need him more than anyone else