The National Weather Service forecasts major to historic flooding along portions of the Missouri and Mississippi River basins for the rest of this week. The flooding started after a massive late-winter storm hit the Midwest last week. (March 19)
AP

Seventy-four cities, 65 counties and four tribal areas in Nebraska had declared states of emergency Tuesday as swaths of the Midwest battled rivers swollen by days of heavy rains and spring snowmelt.

Three deaths have been blamed on the flooding in Nebraska. Vice President Mike Pence was scheduled to survey the damage in the region Tuesday with Nebraska Gov. Pete Ricketts and Iowa Gov. Kim Reynolds

“Heading to Nebraska today to survey the devastating flood damage,” Pence said in a tweet. “To the people of Nebraska, Iowa, South Dakota, Kansas & all regions impacted: we are with you!”

Thousands of people in Nebraska, Iowa, Wisconsin and Missouri have been driven from their homes by the fast-rising waters.  Two Nebraska men have been missing for days. Some areas braced for more rain Tuesday, forecasters said.

Pence will be in Nebraska at the request of President Donald Trump, press secretary Sarah Sanders tweeted on Monday. 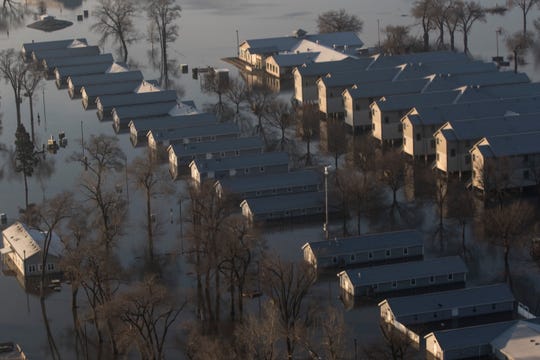 The culprit is a combination of runoff into rivers from the “bomb cyclone” storm that roared across the country last week and spring snowmelt after a winter of heavy snow.

In Hornuck, Iowa, Dale Ronfeldt, 66, stood in his backyard overlooking a drowned garage and a nearly flooded swimming pool. “We have a scare every year,” he said. “We have cried wolf so many times that you don’t know if it’s really going to happen this time or not. This time, it was real.”

More than 2,000 Iowans have fled their homes since heavy rains triggered flooding last week. Some residents in parts of southwestern Iowa were forced out of their homes Sunday and Monday as a torrent of Missouri River water flowed over and through levees.

Overall, as of late Monday, about 8 million people in 14 states live where a flood warning is in effect, the National Weather Service said.

About 200 miles of levees along the Missouri River have been either breached or overtopped, the U.S. Army Corps of Engineers reported.

At a news conference Monday in Sioux City, Iowa, Reynolds said the flooding “is worse than even what we saw in 2011, and we’re just getting started.”

Hundreds of homes have flooded in northwest Missouri after the river breached several levees. About 100 roads were closed because of high water, and Holt County Emergency Management Director Tom Bullock said Monday that many homes were inundated with 6 to 7 feet of water. One couple required a helicopter rescue. 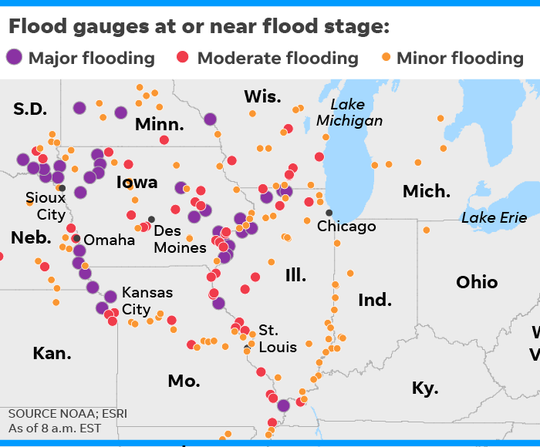 In Nebraska, Ricketts said first responders, aided by the National Guard, completed more than 300 rescues across the state.

Offutt Air Force Base posted pictures on Facebook depicting large sections of the base swamped by flooding, and officials said the water wasn’t likely to recede until Thursday.

“The Warhawks are Air Combat Command’s most deployed Wing and even a 1,000 year flood won’t change that,” the post said.

In Lincoln, city officials said power losses and a water pressure issue led to establishment of mandatory water use restrictions: no outdoor use and a postponement of laundry and even bathing.

“Let’s all do our part to conserve the current water supply,” the mayor’s office said in a statement.

In Illinois, Freeport City Manager Lowell Crow said the town of 25,000 residents west of Rockford could see an all-time record flood along the Pecatonica River.

Rain will spread back across the central Plains on Tuesday and may be mixed with wet snow along its northern fringe, AccuWeather warned.

Rangers LHP Mendez has elbow sprain, likely out till June