SportsPulse: Before you hit “submit” in your office pool’s bracket challenge follow these simple “Do’s” and “Don’ts” when filling out your March Madness bracket.
USA TODAY

Filling out a NCAA Tournament bracket isn’t rocket science – but does being a rocket scientist give you a better bracket?

As basketball fans around the country strategize on how to fill out their March Madness brackets, a lot of factors go into the mix: favorite teams, tournament rankings and factoring in the inevitable upsets.

Bronson Messer, a senior computational scientist who works on computational astrophysics at Oak Ridge National Laboratory (aka a real rocket scientist), has some very important advice: Remove your personal emotions and biases when filling out your bracket.

“Filling out a bracket is a very emotional thing,” Messer said. “I would say, try to be as impassionate as possible.”

Messer said if he were to fill out a bracket as a scientist, he would run what’s called a Monte Carlo simulation, which explores every possible outcome of match-ups in the tournament and gives the odds of each team winning.

For the average person filling out a bracket, however, Messer recommends just picking winners based on seeds and selecting “a handful of upsets.”

“You may disagree with the seeds, but they’ve watched all the games, so they know what they’re talking about,” Messer said. “Picking a straight line ticket using seeds gives you a pretty good chance.”

There’s more than one way to pick an NCAA tournament winner. Here’s a few ways to try out.
Angela Gosnell, Knoxville News Sentinel

Good news for basketball fans: Messer said watching more basketball will give you a better idea of how teams play and which teams to pick. So consider this permission to binge!

“The more you’ve watched, the better you are,” Messer said. “I think that people who watch a lot of sporting events have a good feeling for statistics.” 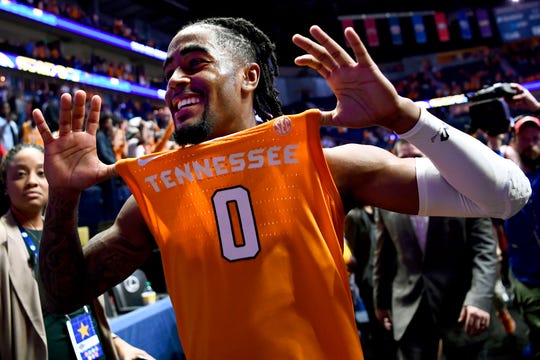 Tennessee guard Jordan Bone (0) lifts the Tennessee part of his jersey as he leaves the court following Tennessee’s 82-78 victory against Kentucky in the SEC Tournament held at Bridgestone Arena in Nashville, Tenn., on Saturday, March 16, 2019.  (Photo: Brianna Paciorka/News Sentinel KNS)

When it comes to filling out a bracket, Messer said to trust your first instinct.

“The advice I might give people is, don’t over-complicate it,” Messer said. “Trust your gut, because your gut might be correct.”

Rocket scientist says Tennessee will win it all

Messer said his picks for the Final Four are Michigan, Duke, Tennessee and North Carolina. For the championship winner, Messer said he’s picking Tennessee. But he acknowledged that he has a little bit of personal bias: he’s a University of Tennessee alum.

Personal bias aside, Messer said he would still pick Tennessee to win it all.

“In all honesty, I think they have a chance,” Messer said. 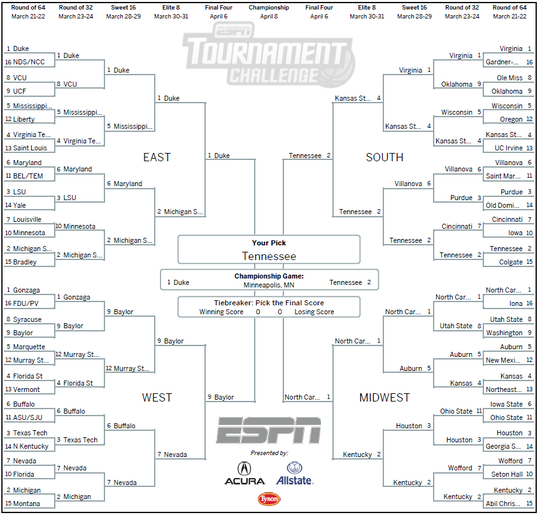