Will there be another Loyola-Chicago Cinderella run this year? Maybe. Scott Gleeson thinks these five teams could shock the college basketball world.
USA TODAY Sports

As the confetti fell in front him, Old Dominion men’s basketball coach Jeff Jones leaned against the scorer’s table and buried his face in a towel.

It was “a big jumble of thoughts and emotions” all hitting at once, he said — the elation of winning the Conference USA tournament last Saturday and clinching a spot in the NCAA field. The pride in his players, including senior guards with whom he’s grown close. And of course, the backdrop of the personal battle he’s been quietly waging throughout the season.

Jones announced in September that he is undergoing treatment for a recurrence of prostate cancer — the same disease he fought in 2015. He learned in the summer of 2017 that the cancer had returned, and he started a new treatment program last June. The regimen has continued throughout the season, as Old Dominion has climbed to the top of Conference USA and clinched its first NCAA tournament appearance since 2011.

SPORTS, DELIVERED: Get latest news right in your inbox! 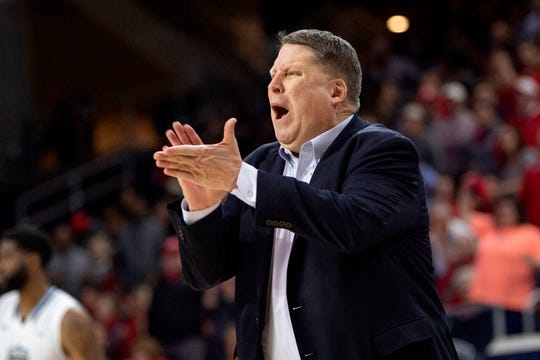 The 14th-seeded Monarchs will face No. 3 seed Purdue on Thursday night.

Jones said he decided to publicly disclose his fight before the season in part to be up-front with his team, and in part to raise awareness about one of the most common cancers in men; About 1 in 9 men will be diagnosed with prostate cancer in their lifetimes, according to the American Cancer Society.

“Sometimes even when crappy things happen, you can try to use those things for the good,” Jones, 58, told USA TODAY Sports this week. “If men get tested, you can detect this early. It doesn’t mean you won’t get prostate cancer, but if you (catch) it early, then oftentimes you can manage it and you can live with it for a long time.”

As Old Dominion has surged back to the NCAA tournament this season, clinching its spot with a win over Western Kentucky in the conference championship game, Jones has worked hard to maintain a normal routine — not allowing himself, or anyone else, to dwell on his health.

Longtime assistant coach Kieran Donohue said he hasn’t noticed any change in Jones’ focus or energy level, even behind the scenes. His demeanor is the same. Jones may have an extra blood test here or a visit to the oncologist there, but he said he’s been able to always schedule them in the morning, so they never interfere with practices in the afternoon.

Privately, though, there have been plenty of struggles. Jones said he has been on intermittent hormone therapy that leaves him dealing with fatigue, hot flashes and other side effects that he would rather not detail, describing them only as “not very fun.”

“When people talk about fighting cancer, that’s what you’re talking about — there’s going to be bad days and you fight through,” Jones said. “You bear down, just like we ask the players to if they’re tired in a game or whatever. It is a fight, it is a competition.”

Donohue, who has worked with Jones for 24 years at three different schools, said he believes Jones “went to great lengths, probably, to hide (his struggles) from everyone” this season. And he’s been so successful on that front that Donohue sometimes finds himself marveling at how physically healthy Jones looks, in some respects. He no longer walks with a limp, thanks to two hip replacements unrelated to the cancer, and he is exercising more frequently.

“You may even sort of forget about (the prostate cancer), quite honestly,” Donohue said. “He works very hard to not make this about his personal health situation. … I think it’s the last thing he wants to talk about, quite honestly, because he would much rather keep the focus on these young men and on this team.”

Jones has now taken three teams to the tournament, including 1995 when Virginia reached the Elite Eight. The Monarchs will be his first tournament team since 2009, when he led American University to its second NCAA appearance in as many years. Like those teams, this Old Dominion squad is anchored by a pair of senior guards — Caver and leading scorer B.J. Stith (16.9 ppg). And like those teams, Jones is quick to praise their approach in tight games.

“Probably the simplest way I could put it about this team is they don’t blink,” Jones said. “Defensively, we work at it really hard. I think we’re very good on the boards. But the best thing we do is compete.”

Jeff Jones and his wife, Danielle, are raising money for Hope Lodge, which provides accommodations for cancer patients who need to travel for treatment. Learn more here.