DES MOINES, Iowa – Gov. Kim Reynolds is warning Iowans what millions of Midwesterners have come to understand in recent days – the severe flooding that has swamped much of the region may be a long way from over.

Reynolds said the snow melt and spring rains could create additional flooding in the weeks ahead because of compromised levees.

“We’re in for the long haul. We’re just getting started,” said Reynolds, who added that her tour of western Iowa this week had revealed unprecedented flooding. “It looked like an ocean.” 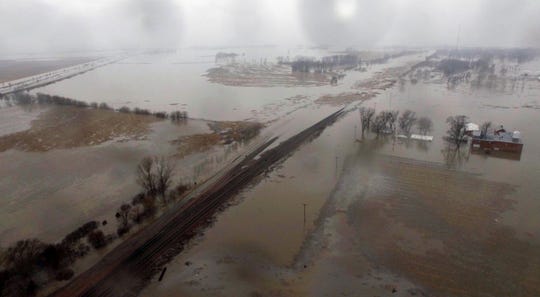 At Offutt Air Force Base, Col. Michael Manion, commander of the 55th Wing base there, said the base was recovering but that it was “obvious it will be some time” before the base returned to normal operations.

“The scope of this historic disaster has touched nearly every aspect of Nebraska,” Manion said.

In Missouri, Amtrak service between Kansas City and St. Louis was suspended through Sunday, March 24. Amtrak blamed freight trains diverted to Amtrak’s tracks “due to historic flooding in the Central U.S.”

The current round of flooding, triggered by last week’s brutal “bomb cyclone” storm, was expected to persist across several states into next week. The Army Corps of Engineers says more than a dozen levees have been damaged or just overwhelmed in Nebraska, Iowa and Missouri.

AccuWeather Lead Long-Range Meteorologist Paul Pastelok said flooding could be a chronic problem across much of the Midwest deep into spring, which formally kicked off Wednesday. Add El Niño to the reasons why, he said.

“El Niño is likely to persist through the spring and not weaken like it usually does this time of the year,” according to AccuWeather Lead Long-Range Meteorologist Paul Pastelok.

Translation: While the storms probably won’t reach “bomb cyclone” intensity, there will remain the risk of strong storms into May.

Martha Bane, a managing director at the risk management firm Gallagher, said the impact can be serious on businesses in Nebraska and throughout the region. She said some  companies not in flood zones don’t have flood insurance.

Additionally, she said some business insurance that covers damage to buildings and inventory may not cover the cost of business interruption. Some  operations may not reopen for weeks, and would-be customers struggling to rebuild may be kept away longer, she said.

Then there is the issue of “demand surge,” she added.

“When a large area is affected by a catastrophic loss, increased costs of materials and labor can add significant additional cost to the restoration,” she said. “Local labor shortages can further exasperate the situation.”

More: Before, after satellite images show destruction in Nebraska and Iowa

According to the Federal Emergency Management Agency, more than 40 percent of small businesses never reopen after a disaster, she said.

“The longer the floods linger the more likely some businesses may not recover.”

There were small victories. In Iowa, residents of Lehigh, population 400, were cleaning up from weekend flooding that some said was the worst they had ever seen along the Des Moines River.

“Instantly it was gone,” Goodpastor said. “Like somebody plunged the toilet.”

This koala stayed cool with dog inside Australian man's car

Take this pill! Or not... Making sense of medical studies - "Where Did You Get This Number?" podcast