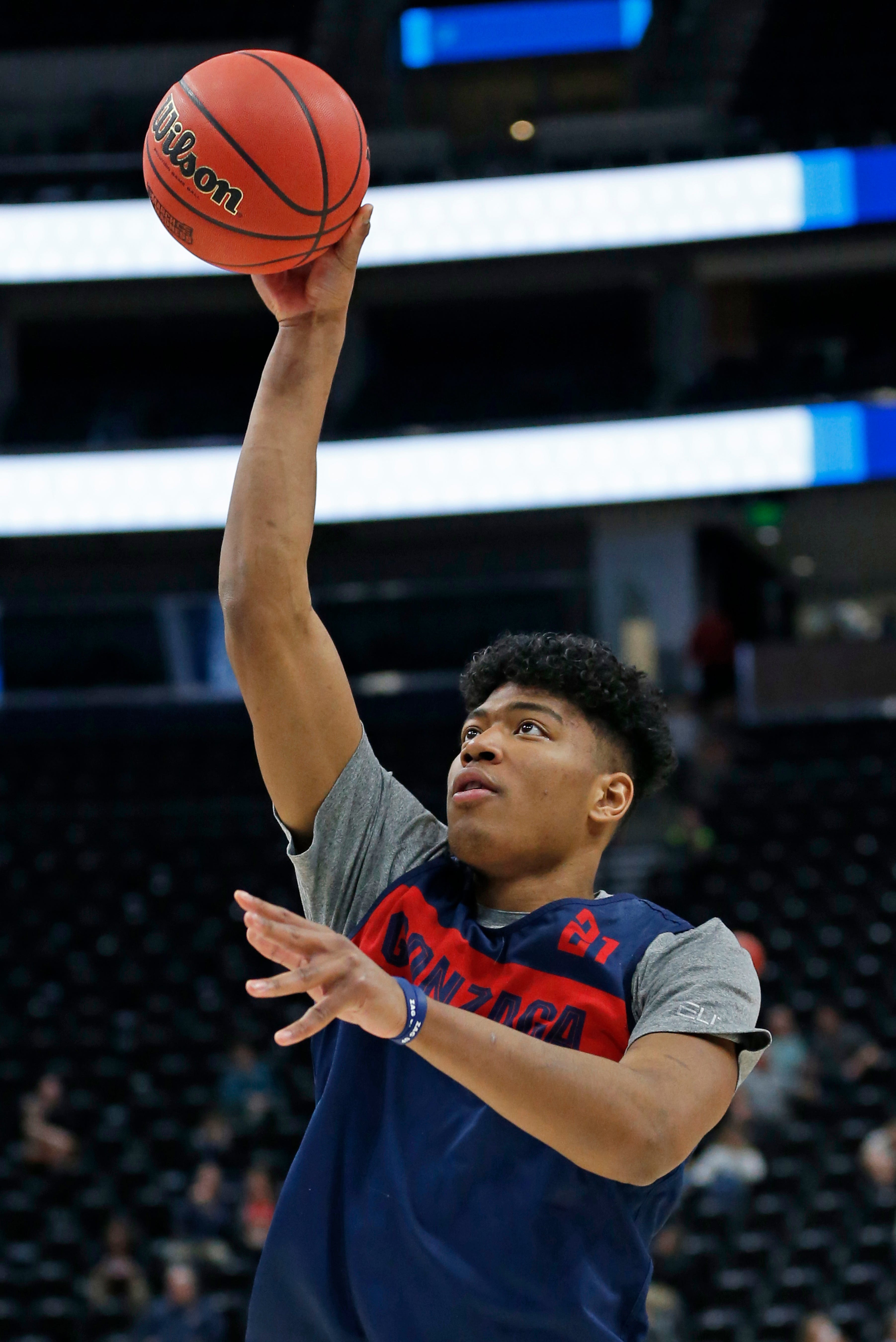 SALT LAKE CITY (AP) — Rui Hachimura leaned against a wall inside Las Vegas’ Orleans Arena, towering above the boom microphones and cameras being held by the reporters below.

The Gonzaga big man patiently answered questions in Japanese for more than 15 minutes from the nearly two dozen reporters, including one who raised his hand and bowed after Hachimura gave him a thoughtful answer.

Hachimura is used to the attention by now. Whether it’s back in his homeland of Japan or after a loss in the West Coast Conference tournament in Las Vegas, Hachimura always draws plenty of attention.

“I don’t mind it,” he said Wednesday in Salt Lake City as another group of Japanese reporters waited to ask questions. “But they do ask a lot of the same questions.”

Hachimura has developed a huge following in Japan and in the United States from fans who have followed his rise from phenom to one of college basketball’s best players.

Raw when he arrived at Gonzaga in 2016, Hachimura has developed into a possible NBA lottery pick as the Zags prepare to face No. 16 seed Fairleigh Dickinson in the NCAA Tournament West Region on Thursday.

Hachimura became popular when he played for Japan’s national youth teams and that popularity has grown exponentially as he has become the best player on one of American college basketball’s premier programs. Hachimura has put himself in position to become the third Japanese player to reach the NBA, joining Memphis Grizzlies forward Yuta Watanabe and Yuta Tabuse, who played four games for the Phoenix Suns 14 years ago.

“I do get noticed a lot, but I kind of get used to it,” Hachimura said. “And it’s an important time in national Japanese basketball history, so I’m fine with it.”

Hachimura was a baseball player when he was younger, in part because the sport is so big in his home country, but also because he was just 5-foot-5.

Once he sprouted and reluctantly tried basketball to stop a friend’s nagging at 13, Hachimura made a steady climb to stardom.

A 6-foot-8 forward, he drew international attention at the 2014 U-17 World Championships when he averaged 22.6 points and scored 25 against a U.S. team that featured future NBA players Jayson Tatum, Harry Giles and Josh Jackson.

Hachimura also caught the attention of Gonzaga assistant coach Tommy Lloyd, who had a knack for bringing talented international players to Spokane, Washington.

Hachimura struggled when he first arrived at Gonzaga, with the American game, the culture and, particularly, the language.

“He was absorbing about 10 percent of what we were telling him,” Gonzaga coach Mark Few said.

Hachimura worked hard on the language — with the help of Zags video coordinator Ken Nakagawa — and his game, becoming proficient at both.

The Japanese big man was a role player when Gonzaga reached its first national title game in 2017 and became a more important cog last season, averaging 11.6 points on a team filled with veteran players.

Hachimura made a big jump as a junior, boosting his scoring average to 20.1 points while shooting 62 points and grabbing 6.6 rebounds. He has the size to play down low, developed a superb midrange jumper and improved his 3-point shooting to 47 percent this season.

Hachimura’s steady improvement can be tied to him becoming more aggressive.

When Hachimura first arrived at Gonzaga, he was passive on the court, deferring to older teammates and getting pushed around by more aggressive opponents. At the constant urgings of his coaches, Hachimura became much more assertive and willing to take over games, as he did by making the decisive plays down the stretch in Gonzaga’s win over Duke in the Maui Invitational title game.

“When he got here, it’s very much within the cultural norms to defer to people that are older than you, who have been here a while or they have seniority on you,” Few said. “We’ve had to get him to kind of work through that.”

With Hachimura leading the way, Gonzaga is a favorite to reach its second Final Four in three years.

Pull it off and the attention on Hachimura will only intensify — and he’s fine with that.

Hope Hicks, AMI agree to turn over documents for House probe into Trump