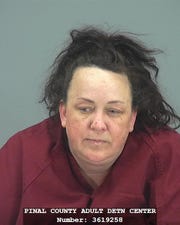 PHOENIX – A mother and her two adult sons were arrested Friday on suspicion of repeatedly abusing the mother’s seven adopted children when they did not perform well in the mother’s YouTube videos, police in Maricopa, Arizona, said.

The children reported being locked in a closet for days without food, water or access to a bathroom, pepper sprayed from head to toe and forced to take ice baths, according to police.

The woman, identified as Machelle Hackney, 48, of Maricopa, has operated a YouTube channel called “Fantastic Adventures,” where episodes featured each of the seven adopted children acting out different scenarios, usually inside a house or backyard, according to a probable cause statement from police.

Hackney’s channel racked up 700,800 subscribers and more than 242 million views, police said in the report.

Feb. 22: DA: Couple who kept kids in filthy house ‘will serve the rest of their lives in prison’

he woman’s two adult sons, Logan, 28, and Ryan, 26, also were arrested in connection with the abuse of the seven children because they failed to report Hackney’s abusive behavior, according to police.

During a child abuse investigation on March 13, Maricopa police initially found that one of the seven adopted children was repeatedly abused by her mother at a residence in Maricopa, the report said.

The child told authorities that the abuse consisted of being pepper sprayed and locked in a closet, otherwise known as the “green-screen room,” for days without food, water or access to a restroom, according to the statement. 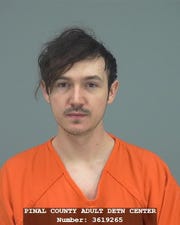 Logan Hackney, 28, faces charges failing to report the abuse of a minor, according to police. (Photo: Pinal County Sheriff)

The child added that her six other siblings were being punished in the same manner, officials said.

The statement does not specify the children’s ages, but several who appear in the videos, which still were posted on YouTube on Tuesday night, appear under 10 years old.

Authorities responded to the information by conducting a welfare check at Hackney’s residence, leading to the finding of a child wearing only a pull-up in a closet with a locking mechanism located inside the woman’s master bedroom, the statement said.

Officers then found the remaining six children, who appeared underweight and malnourished with pale complexions and dark circles around their eyes, according to the police statement.

The statement said the children told officers they were hungry and thirsty.

While speaking with authorities, one of the children consumed three 16-ounce bottles of water in under 20 minutes, the statement said. The child told officers he was punished by Hackney and pepper sprayed numerous times.

Another child said she was extremely hungry and thirsty but feared the woman would smell the chips that officers provided at the scene on her breath, according to authorities. Officials added that the child was shaking and appeared too scared to continue with the interview.  Many of the children were not questioned as they appeared to have a similar demeanor, the statement said. 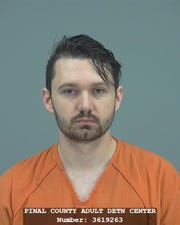 Ryan Hackney, 26, faces charges of failing to report the abuse of a minor, according to police. (Photo: Pinal County Sheriff)

While authorities visited Hackney’s residence for the welfare check, the woman ordered her two adult sons to prepare food for the children, Maricopa police said.

One child told authorities they were only permitted to eat because police were present, adding that she had not been allowed to eat for two days, authorities said.

Police obtained a search warrant and found two cans of pepper spray located in Hackney’s room near the closet where the children were frequently locked away and forced to sleep, officials said.

Some of the children said one of the adult sons, Ryan Hackney, would sometimes sneak food into the closet, the statement added.

The closet, or “green-screen room,” consisted of a deadbolt lock and bare tile floor with no windows, furniture, blankets, clothing or toys, authorities added.

The Department of Child Safety removed the seven children from Hackney’s custody, and the children underwent forensic interviews and medical examinations, according to police.

The children each stated their roles in the mother’s YouTube series, “Fantastic Adventures,” and said they would receive punishments for not obeying Hackney’s orders, forgetting their lines or making a mistake in any way, the probable cause statement said.

January 2018: Shackled kids were going to move to Oklahoma ‘within days’ of parents’ arrest

Through the interviews, authorities learned that Hackney spanked the children and sprayed their faces and genitalia with pepper spray. One child said she felt the pain from the pepper spray for four to five days, the statement said.

The children told authorities that they were sometimes beaten with a hanger, belt or brush, and pepper sprayed from head to toe, Maricopa police said. One child said she would witness her siblings enduring the abuse.

“We take safety on YouTube very seriously. We work closely with leading child safety organizations and others in our industry to protect young people.”

Another child said he was beaten in the head by Hackney’s knuckles and described the pain as being struck with a hammer, while another one of the seven children said she wore a mask over her face to protect herself from the pepper spray, the statement said.

The children said they had not attended school so they could make the videos, according to police.

Ryan Hackney declined to speak to police, but his brother Logan Hackney agreed to talk with authorities, Maricopa police said.

Logan Hackney claimed he spoke with his brother about reporting the child abuse, and he admitted the children were kept locked in the closet for extended periods of time as punishment, according to officials.

He added that he heard the children screaming and crying, observed physical injuries on the children and was aware the children were pepper sprayed and forced to take ice baths, according to the statement.

Machelle Hackney was arrested Friday and booked into Pinal County Jail on seven counts of child abuse, five counts of unlawful imprisonment and five counts of child neglect, the police report showed. She also is facing two counts of molestation of a child. One of the boys told police the woman grabbed and pinched his genitalia, causing severe pain.

Logan and Ryan Hackney were booked into Pinal County Jail on seven counts each for failing to report the abuse of a minor, according to the police report.

YouTube said Hackney’s channel was demonetized as soon as it was made aware of her arrest.

“We take safety on YouTube very seriously,” according to a YouTube statement. “We work closely with leading child safety organizations and others in our industry to protect young people. When we’re made aware of serious allegations of this nature we take action, which may include suspending monetization, or, upon conclusion of an investigation, terminating channels.”

YouTube said Hackney’s channel would be terminated if she were to be convicted of the charges or if she entered a guilty plea.

Last month, YouTube suspended comments on videos featuring minors in an effort to prevent subjecting them to predators.